KEY TAKEAWAYS FROM THE 2020 VMAS

From show-stopping performances to technological innovations, the 2020 VMAs were both unusual and hopeful.

In a manner both celebratory and somber, the 2020 MTV Video Music Awards premiered last night, the first live awards show since the coronavirus outbreak.

The show covered a lot of ground in just over two hours: Best Hip-Hop winner Megan Thee Stallion remotely popped champagne, Miley Cyrus straddled a disco ball, and host Keke Palmer (the first Black woman to ever host the show solo) made the most of a largely audience-less evening. Read below to catch up on the highlights from a very distinctly 2020 VMAs.

The most prevalent theme of the night was advocacy. The VMAs opened by dedicating the awards show to Black Panther star Chadwick Boseman, and highlighted social causes and unsung heroes throughout the night. The Weeknd, who took home awards for Video of the Year and Best R&B, used both his speeches to demand justice for Jacob Blake and Breonna Taylor, while DaBaby’s performance included Black Lives Matter signs as the dance troupe The Jabbawockeez busted him out of a cop car.

COVID-19 was also on many stars’ minds, as frontline workers were honored in a special VMA category, and performers like Lady Gaga urged viewers to mask up.

It was undeniably Lady Gaga’s stage last night. The pop superstar took home three awards for her collaboration with Ariana Grande, Rain On Me, as well as winning Artist of the Year and the first-ever TriCon award.

And if Gaga’s three-part performance (which included brain-shaped pianos, athletic choreography, and an appearance by Grande) proved that she is the queen of spectacle, her acceptance speech for her TriCon award demonstrated her substance: “the wrath of pop culture will inspire you and the rage of art will empower you as it responds to hardship with its generosity and love.” 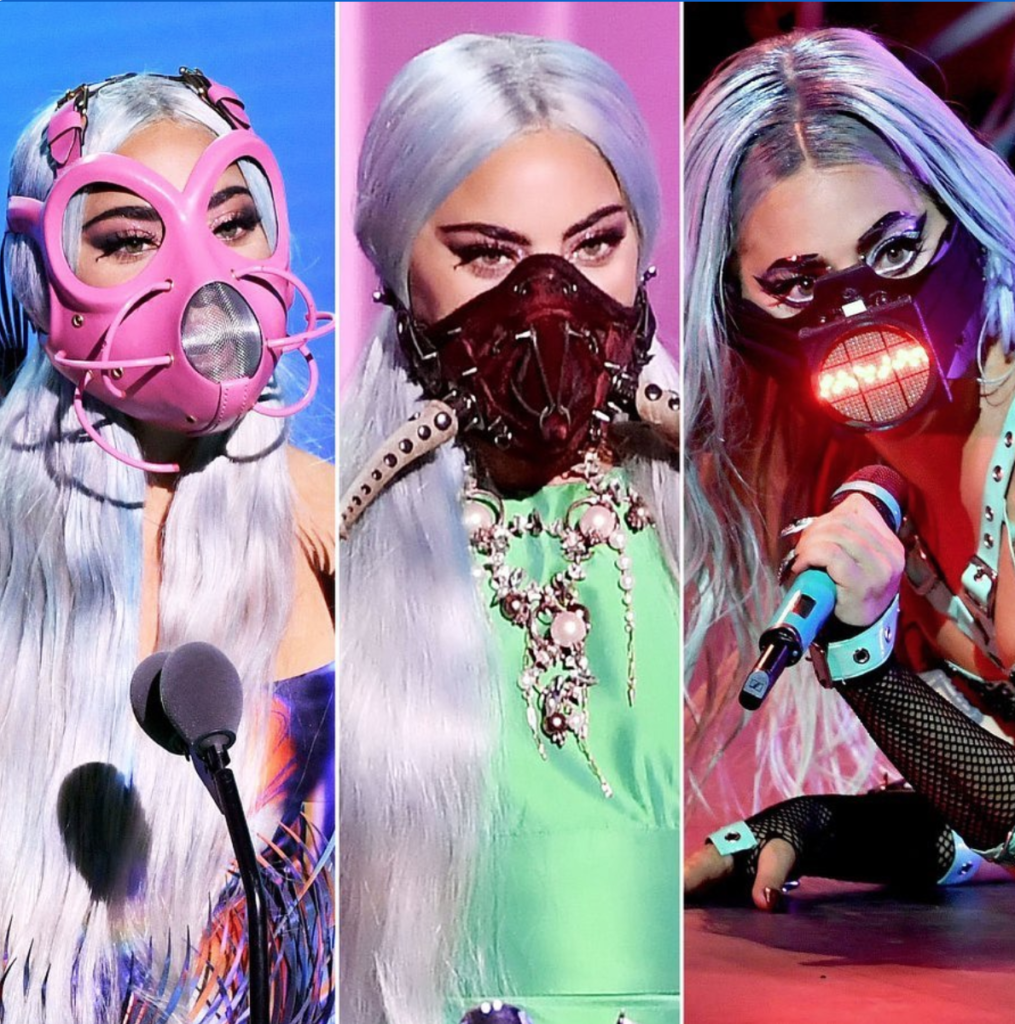 The show was held in a few different locations, and due to corona-based restrictions, the performers had to get creative. The result was an exploration of the future of technology-driven live entertainment. Cosmically lit backdrops, campy sci-fi splendor, and suggestively illuminated costumes permeated the performance by Best New Artist winner Doja Cat, while digitally rendered and enhanced backdrops added surprising storytelling elements to The Weeknd’s skyscraper performance of Blinding Lights, and DaBaby’s wildly righteous joy ride.

One of the most energized moments of the evening was when BTS performed their new English single, Dynamite, which just broke the YouTube record for most views within 24 hours. The K-Pop stars, clad in bell-bottomed suits, delivered one of the night’s strongest performances and took home 4 VMAs along the way. Latin American boy band CNCO also gave a strong performance, while Best Latin winner Maluma performed an exuberant rendition of his Spanish song Hawaii, and delivered his acceptance speech largely in Spanish.

There were, as always, issues with the show. From revelations that the show was not actually live to a lack of enthusiasm from award presenters, the VMAs had its fair share of lackluster and lukewarm moments.

Imperfect as they were, the 2020 VMAs did perfectly embody humans’ ability to make the most out of any situation. It was a demonstration of creativity, collaboration, and speaking up for what matters. Most of all, it was a celebration of the joy of music, something not lost on the millions who rely on it to get through the day.

So no, the MTV VMAs were not completely the same as they were in a pre-covid world. But in the words of the night’s big winner, Rain On Me, “at least we try.”