In this edition of Artists in Quarantine, we digitally meet Yasmine Diaz, an artist based in LA, to talk about her mission to create space for every narrative.

Who is Yasmine Diaz?

I was born in Chicago and now live in LA. I’m 43 years old but only started practicing as a full-time artist at 39; my unconventional personal history led to a late start.

My parents immigrated to the U.S. from Yemen in the late ’60s. They were raised in the highlands of southern Yemen where my dad received minimal education and my mom none. Their marriage was arranged, as were all marriages in our family. Although not devout, our community was strictly Muslim. My siblings and I had a very different upbringing. Attending public school in Chicago, we were exposed to different lifestyles and cultural norms that often conflicted with the values we were raised with.

As a kid, I understood early on that there were things I shouldn’t talk about or question. For example, I knew I was agnostic at a young age and that I didn’t want an arranged marriage. As I became an adolescent it was very clear that my hopes and intentions for myself were not aligned with those of my parents.

At that time, there was no woman in our family or community who lived independently. You were either someone’s daughter and lived at home, or were married. Anything different from that was unthinkable.

After graduating high school, I left home with two of my sisters. It was a very drastic separation. For 19 years we had no contact with our family and they didn’t know where we were. Unfortunately, at that time, the unwritten honor system translated to a very good chance of physical harm and retribution.

For years I made art independently and sporadically, avoiding personal subject matter or anything that spoke to who I was. Following 9/11, I grew restless about stifling myself. There was a lot of attention paid to Muslims and Arabs. It often fell into two overly simplified narratives. On the right we were demonized as angry barbaric terrorists, whilst on the left critical conversations were avoided, sometimes leading to cultural relativism regarding human rights violations. As an agnostic person of Muslim heritage, I felt that people like myself – who had complicated relationships with Islam – were getting lost between two opposing narratives.

My main hesitation in making the shift in my work was the fear that it would be used to fuel hateful rhetoric and bigotry. I try to talk about the issues that are important to me in ways that are nuanced and complicated. I share my reality in the hopes of encouraging thoughtful dialogue within communities, like the one in which I was raised.

How do you perceive creativity?

At its most basic, art is a means of communication. I was raised to believe I should avoid bringing attention to myself; I should not be loud. I should be amenable and not difficult. I am still unlearning those thought patterns. It was not until I was able to start talking about these issues that I felt free. In many ways, art has been my therapy.

What overarching feeling do you have?

This time is bringing things into sharp focus. I hope we learn to look after each other. Although we are physically distant, in a lot of ways we’re more connected than ever as we’re all in lockdown. I feel anxious but cautiously optimistic. I’m hopeful that this will lead to necessary change, but am all too aware of the history of repeated amnesia in this country.

Before lockdown, in big cities like LA, the pace was so fast. There was a constant atmosphere of “FOMO”. It felt like we had reached the peak of social-media sharing, hyper-productivity, and competitiveness. There was even competitiveness in areas that seemed counterintuitive, like meditation and self-care. Nothing was untouched by capitalism, everything was commodified. This time is forcing us to re-evaluate society and ourselves, to slow down and be present. 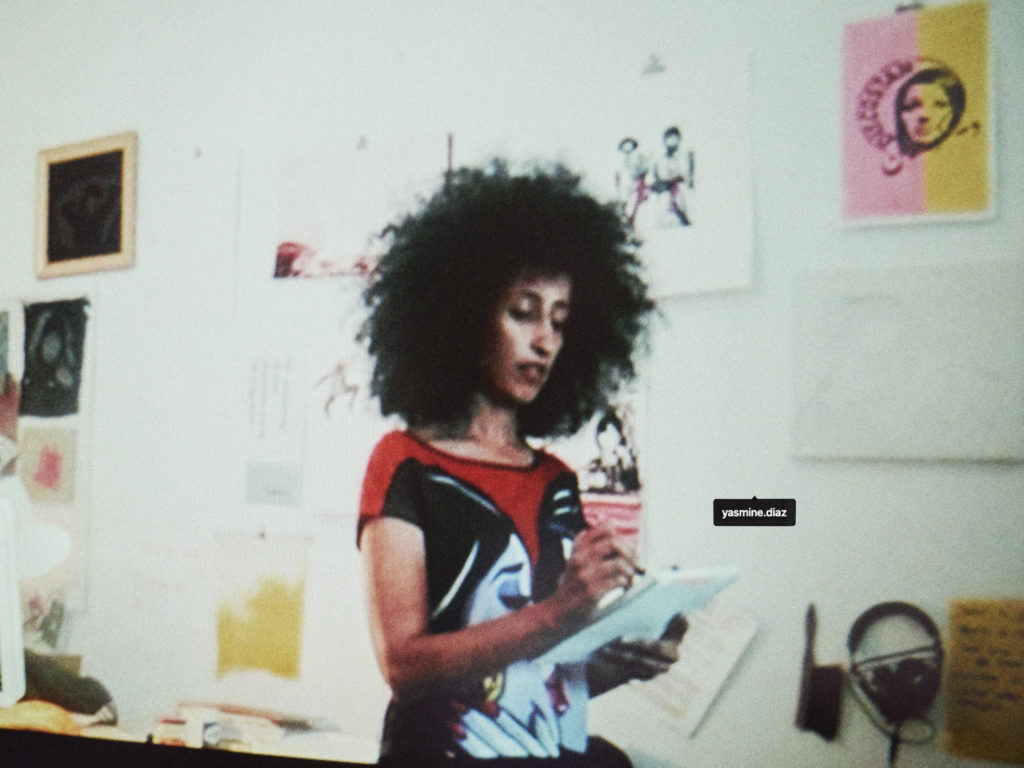 What’s fed your soul in quarantine?

I’ve fallen on the baking bandwagon. I’ve wanted to make bread for a long time and finally have. My husband and I are improving our apartment. Before lockdown, we were working in different states and were set to be apart for about five months, so it was nice to come home and be together with our cats.

I am fortunate to have a studio and have been easing back into simple collage making. I start without an agenda and allow myself to work intuitively with whatever materials I have in front of me. It’s liberating, relaxing, and energizing. I’ve been making greeting card collages and giving them to friends, encouraging them to send them on.

Seeing the creative ways people are helping each other has been encouraging. One friend raised money to buy food from local restaurants and is having meals delivered to the homeless and frontline workers.

What had you forgotten you loved?

Reading books! Like many, I don’t have the attention span I used to (the curse of the digital age). That began to bother me. I want to recalibrate and be more mindful. Spending time doing things like cooking without feeling rushed to be somewhere has been nice. Phone calls have been another ‘rediscovered’ love. Pre-COVID, it was almost bizarre to call someone when you could just text. Now, I welcome phone calls from friends as an alternative to the screen time and Zoom meetings.

How do you think your industry will change post-quarantine?

I hope people will have a renewed appreciation for viewing art in person. It’s just not the same seeing it on screen. This moment has demonstrated how important the digital age is, but also how critical real-life experiences are in terms of meaningful connection.

I’m sure we will see a shift in content and what people want to see. There are likely to be logistical modifications to experiential and interactive works. My exhibition at the Arab American National Museum includes an installation that relies on visitors physically engaging with it. I’m working on a contingency plan that involves handing out gloves and the use of a docent that monitors and disinfects surfaces, so visitors can experience the work as intended.

That we won’t learn what we should from this. Many of those who were already the most vulnerable and undervalued are the ones keeping the country going. Undocumented workers – who, in most states, will not qualify for stimulus aid – are working in places like grocery stores, restaurant kitchens, and produce farms. The fact that their health is disproportionately at risk yet they are unable to receive government aid is absurd.

What will be your biggest takeaway?

It feels too premature to answer that question. I’m still processing. So much is happening, I don’t think any real reflection will come until life resumes to some version of a new normal.

To use my practice to be honest, learn, and ask questions. If there is no risk in the work, or it lacks an element of discomfort, it’s usually flat. I have to continually ask myself, why am I doing this?

Thinking about the future, I would love to be in a position that enables me to support change in this field. The art industry is still opaque with much less regulation than say, the music industry. This breeds inequity in so many ways and people don’t always get credit or are not fairly compensated for what they do.

“There’s really no such thing as the ‘voiceless.’ There are only the deliberately silenced, or the preferably unheard.” – Arundhati Roy.