CAN WE TALK ABOUT TIGER KING’S FASHION?

We chat about the style seen on the popular Netflix show. Plus, a closer look at Joe Exotic’s newly launched clothing line.

If you haven’t seen Netflix’s recent docu-series Tiger King: Murder, Mayhem and Madness, stop reading this article and go and turn on your TV to settle in for seven-episodes of pure insanity. The drama, the scandal, and the fashion will keep your quarantined-self entertained for hours on end. The wacky sartorial choices of the show’s main characters have inspired copycats around the world as we’ve seen people take to Instagram covered in head-to-toe animal print. Tiger King’s real-life protagonist, Joe Exotic, recently launched his own clothing line that sold out within hours and made more than $20,000 in online sales. It’s obvious there’s something about the fashion in this Netflix hit that has viewers clamoring for more. Here we break down the humorous style of key Tiger King figures, with the hope that they’ll give you inspiration (maybe even a reason) to dress up for your next Zoom Happy Hour or FaceTime date.

The show gives viewers an inside look into the lives of exotic animal breeders and big cat keepers across the United States. The story centers around Joe Exotic of the G.W. Zoo and Carole Baskin of Big Cat Rescue and the deadly rivalry that develops between them. This Netflix series has been captivating viewers around the world and providing a much-needed escape for everyone practicing social-distancing right now. Each character who comes onto the screen is stranger than the last, and their often absurd and out-there fashion choices only add to the show’s entertainment value. 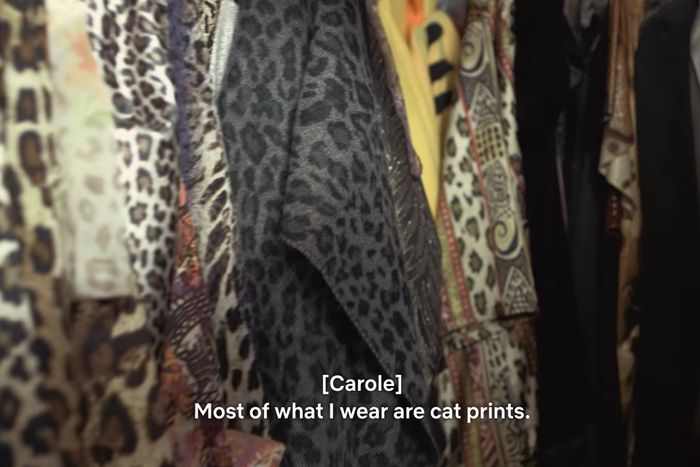 Image via The Cut

The aforementioned Carole Baskin runs her animal sanctuary down in Citrus Park, Florida. As Joe’s antagonist on the show, she is working to end the private trade and ownership of exotic big cats. The woman’s personal style is a cross between a Lisa Frank pencil box and a Coachella girl circa 2015, who can’t seem to leave the flower crown trend behind. Did we mention she’s been accused of feeding her missing husband to actual tigers? If you want to add a bit of Baskin to spice up your WFH looks, may I suggest head-to-toe animal print PJs accompanied by freshly picked flowers in your hair? Courtesy of whatever houseplants are still alive in your apartment, of course.

Then there’s ‘Doc’ Antle, the long-haired OG big cat enthusiast who worked with Britney Spears for her 2001 VMA’s performance. He owns the Myrtle Beach Safari in South Carolina and is considered an early mentor of Joe’s on the show. Doc’s business structure and lifestyle comes across a little, well, culty. With multiple wives and underpaid staff, the big cat owner has done some questionable things over the years. Style-wise, his outfits are on the tamer side, despite his loud personality. Think safari but with a soul patch. As such, any clothing item you own with lots of pockets for storage will do (perfect for snacks). Take your day-four hair and use that grease to slick it back into a ponytail and top it off with a wide-brimmed hat.

Now, on to the Tiger King himself, Joe Exotic. A self-proclaimed gay polygamist redneck who shoots guns with a personal style that hails from the wild west. Yeehaw chic is a trend that left its mark on 2019, and still holds clout today with country crossover artists like Lil-Nas X and Kacey Musgraves rocking American-west inspired outfits. The zoo owner’s look could be seen as an Oklahoma take on the popular cowboy aesthetic. We often see Joe in sequin-covered animal-print button-downs (a look for one of the many NYC digital dance parties, perhaps?). Episode 5 shows us that the zoo owner has at least ten different fringe covered jackets and he’s not one to shy away from a cowboy hat.

Finally, we have to discuss Mr. Exotic’s iconic hairstyle – the mullet. Like a lot of trends today, this cut is so ugly that it’s crossed over into the realm of cool. If anybody has been to Brooklyn lately they’ll know that Joe’s bleach blonde business-in-the-front and party-in-the-back hairdo is on the head of every creative around. I mean, Miley Cyrus even got a version of the cut back in January and a number of people have taken to Instagram to show themselves chopping off their own hair into a Joe-inspired quarantine mullet.

If the above isn’t enough to get you putting together big-cat inspired outfits, Joe Exotic, who is currently incarcerated, partnered with Odain Watson of the brand Odaingerous to create a clothing collection which they aptly named REVENGE. Though the initial merchandise was sold out just hours after their soft launch, as the full line was released on May 6th, you can still buy your very own Joe Exotic themed graphic tees and hoodies right now. Shoppers can even purchase a Covid-19 approved cloth face mask featuring a tiger chomping down on a human hand.

The wild plotline and humorous sartorial choices in Tiger King have enabled us to take a break from world news and forget our problems for a while. Maybe incorporating a few of the outfit choices into your quarantine wardrobe will be just the thing to get you through your millionth Zoom conference call?