“Representation in the media and in public spaces influences what young people believe is possible. And because of representation, I am where I am today.”

Nike’s PRIDE network was developed 8 years ago by Nike employees in an attempt to create a space diverse in orientation, identity, and expression. The idea has since sprouted BeTrue, an annual collection that supports initiatives advancing equality in sport, created by LGBTQIA+ Nike designers.

Mission recently partnered with Nike for the launch of their BeTrue campaign and powerful film, the release of which coincided with the launch of our LGBTQIA+ issue. To mark the film’s release, we spoke to Quinton Peron, an NFL cheerleader and one of the first male cheerleaders to perform during the Super Bowl. A choreographer and dancer, Peron is a role model inspiring youth to follow their dreams.“Don’t try to make other people comfortable,” says Peron. “You weren’t put on this earth to abide by somebody else’s rules.”

What led you to try out to be an LA Rams Cheerleader?

3 years ago, I was at a Lakers Game with my best friends, and I caught a glimpse of the Laker Girls performing mid-court. I recognized a few of them on the court and asked myself ‘why can’t I do that?’ I danced with a few of these girls in high school and college, and in fact, I had taught a few of them at various workshops and masterclasses. I decided to call a friend who had been a Rams cheerleader the year prior to ask about auditions. She told me the audition was the coming Sunday, so I decided to just show up.

You’ve talked about how joining a dance studio in high school introduced you to a more accepting community. Why do you think dance was different compared to the other team sports you played?

Dance was different to me than other sports I played because I was actually in love with it. I didn’t love baseball and basketball the way I loved dance. Dance was, and is, my escape; it made me truly happy. I loved to play baseball and basketball, however, the passion to be great wasn’t there. As soon as dance found me, I knew there was no turning back.

Actually, yes. Well, I wouldn’t necessarily call them ‘challenges.’ I would say I have faced some adversity. I didn’t audition to be one of the firsts, so when the titles ‘First male cheerleader in the NFL’ and the ‘First male cheerleader to perform at the Super Bowl’ came about, there were a couple of gentlemen that cheer or have cheered in the NFL who were not happy. They felt that their work had gone unnoticed and tried to create a spectacle. There have been male cheerleaders in the NFL for YEARS. Teams like the Ravens and the Titans have what we call ‘stuntmen,’ male cheerleaders who tumble and toss the girls in the air. My teammate and I are not stuntmen. We are the first two males to be fully integrated with the girls, meaning that we do the same choreography, every dance step, every battement, every pirouette, every jete and every high v! That is what makes us different. 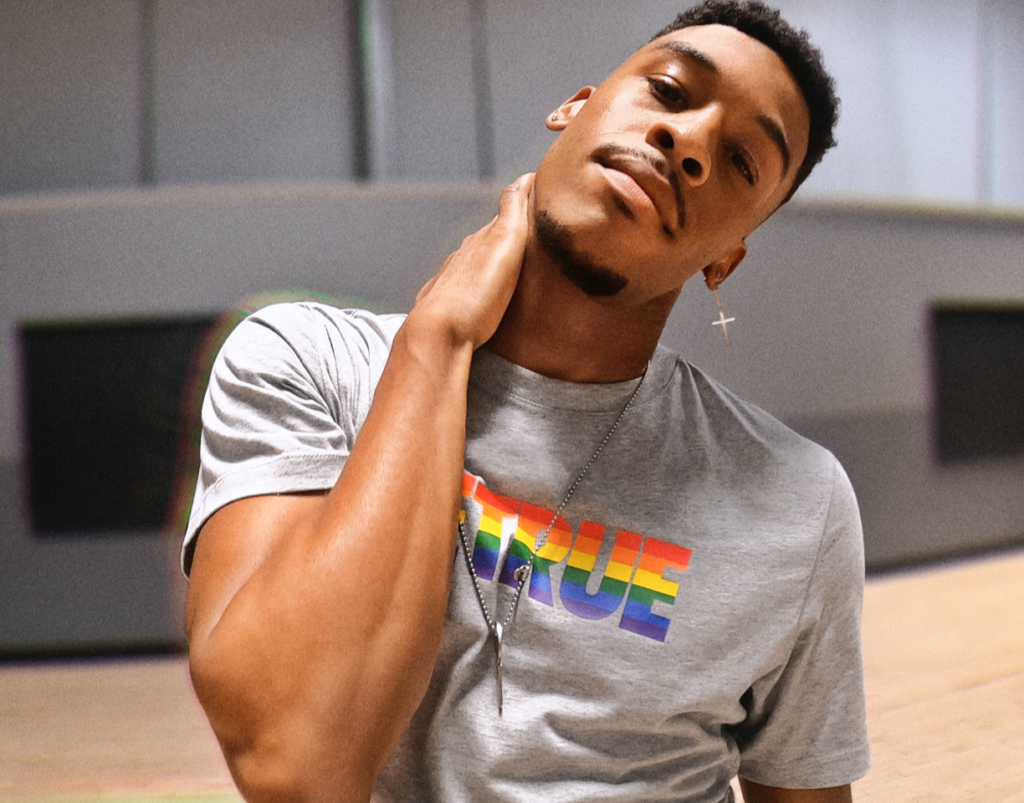 Did you realize what a statement you were making by trying out to dance for the NFL?

NOT AT ALL! I had no idea of the impact I would have on the NFL, heck, the world! I honestly just wanted to dance with my friends again and it still blows my mind that that simple action has changed my life drastically. I now have the opportunity to create spaces and open up doors for those who come after, and that means the world to me. Representation in the media and in public spaces influences what young people believe is possible. And because of representation, I am where I am today.

What advice do you have for young LGBTQIA+ kids who want to cheer?

My advice for the younger generation would be to try out. It is that simple. Research the team you are trying out for. If possible, try to reach out to some of the veterans, ask about the team’s style and the team dynamic, and SHOW UP! Don’t be discouraged if it takes you a while to break into this industry. Most coaches honor resilience and courage and your effort won’t go unnoticed.

What does Pride mean to you, and how do you embody it in your personal and professional career?

Pride to me means self-love and self-acceptance. Pride, to me, means I am able to walk around in a space and be truly and unapologetically myself. As a dance teacher, I preach self-love to my students, EVERYDAY. Nobody is going to love you better than the way you love yourself.

What do you think Nike is doing right with regards to inclusivity in sports?

Nike never ceases to amaze me. Just when I thought everything that could be done was done, Nike went and created more space for individuals like me who are living their life unapologetically, breaking barriers, and finding their purpose. The fact that Nike wanted to recognize that in the #BeTrue campaign shows how much of a ‘put up or shut up’ kind of company they are. For that, I am so grateful! THANK YOU, NIKE!