As designers like Demna Gvasalia and Chitose Abe pick up the couture thread, fashion’s highest form speaks to a new audience.

Who is haute couture for these days? A year after the COVID-19 crisis canceled many momentous debuts for designers like Demna Gvasalia and Chitose Abe, brands have had time to stop and question the purpose of fashion’s highest art form. Some have responded to that question by making their collections more accessible, either through more inclusive casts of models or more affordable ready-to-wear components to match the couture. Others have stuck to tradition, and simply revelled in the chance to present their hand-crafted collections in person rather than mediated through a screen.

But fashionphiles are surely thrilled to have couture back in Paris either way. Below we look at five standout collections from couture’s most recent showings. 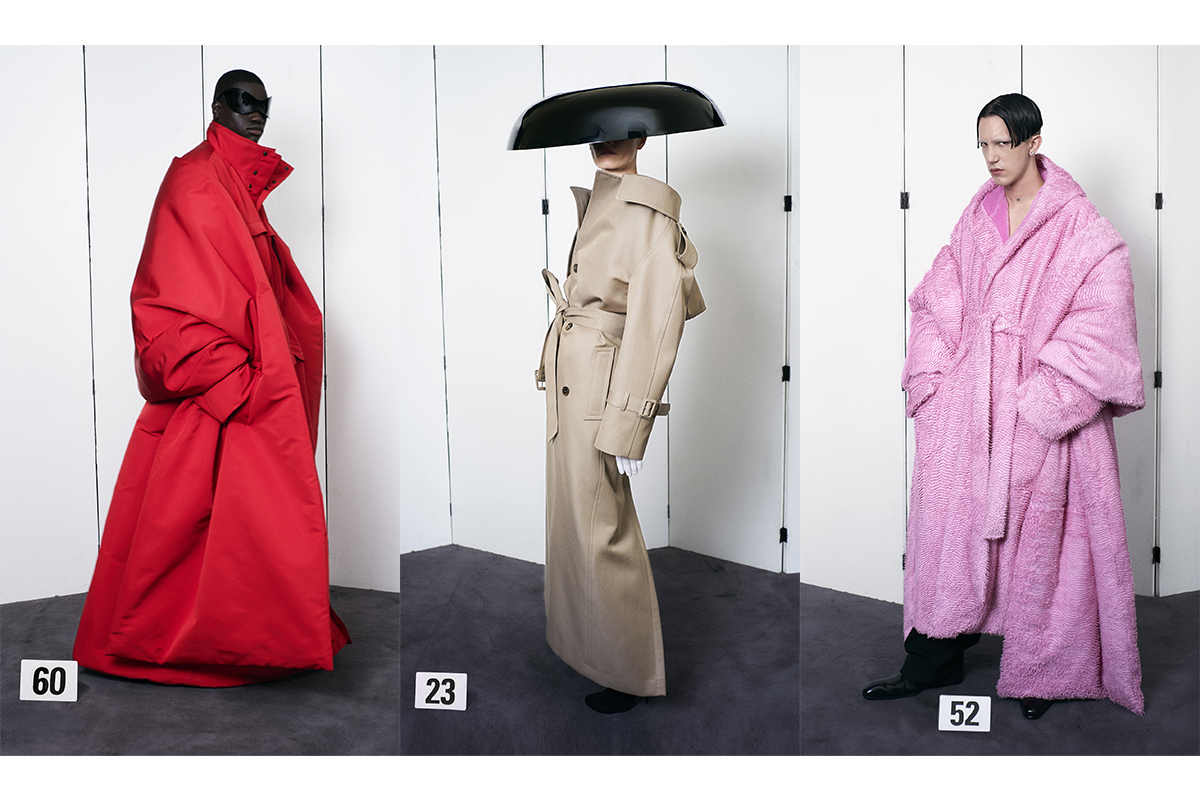 “Couture is above trends, fashion and industrial dress-making,” wrote Balenciaga’s creative director Demna Gvasalia in his show notes for his long-awaited couture debut. While the relaunch of couture marks a return to the house’s origins under its founder Cristóbal Balenciaga, Gvasalia is making haute couture for a new audience, one which includes both Anna Wintour and attendees in Yeezy Foam Runners.

Gvasalia has sometimes relied on tongue-in-cheek fashion mash-ups to make his point, like his political campaign-inspired hoodies for Balenciaga and takeover of a McDonald’s for Vetements. But as he acknowledges, couture is about a pure expression of craftsmanship not gimmicks; he emphasized volume and silhouette in true dedication to the Balenciaga codes, albeit with floor-length puffer coats, head-to-toe denim suits, and off-the-shoulder trench coats as gowns, many topped with Philip Treacy black mushroom hats.

The Georgian designer’s progressive vision of couture included both masculine suiting and exuberant gowns, shown on an array of models of diverse ages and ethnicities (including it-girl-VP-step-daughter Ella Emhoff). 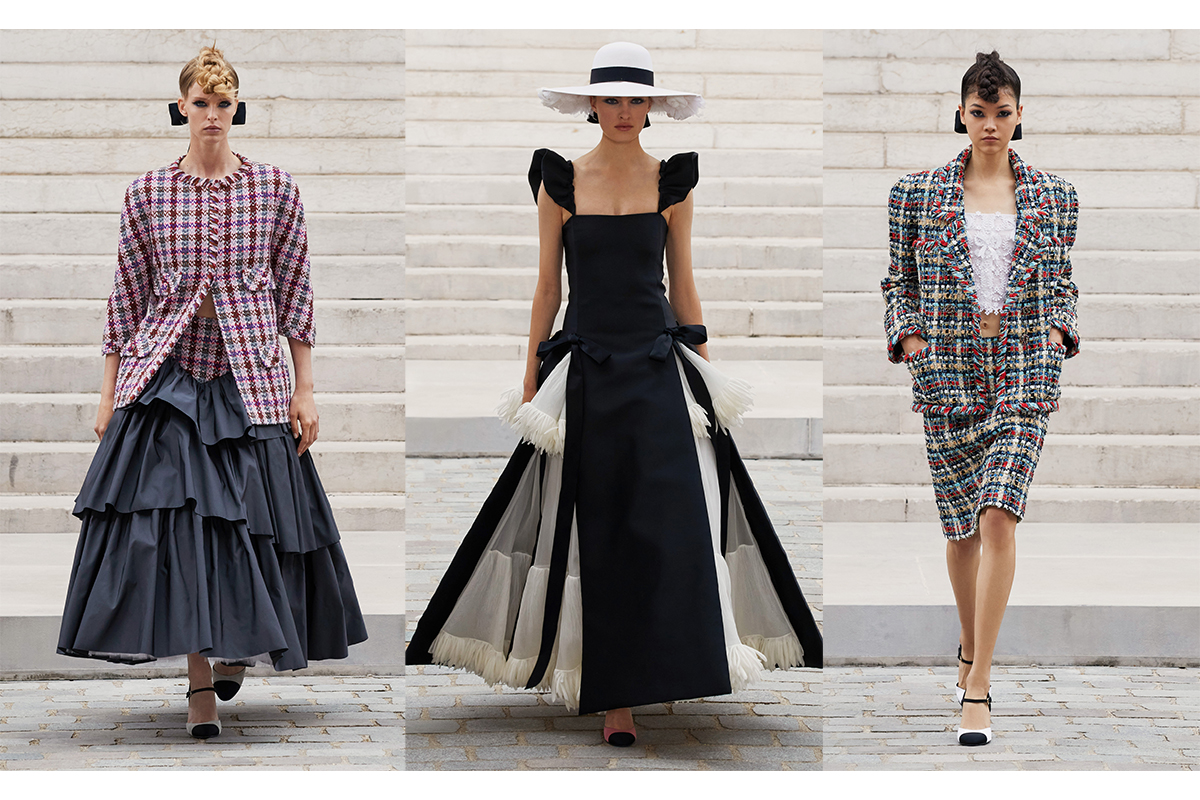 Virginie Viard is in an optimistic, romantic mood for the fall, as she cites Impressionist artists Berthe Morisot, Marie Laurencin, and Édouard Manet among her inspirations for her latest couture collection for Chanel. “Because I love seeing color in the greyness of winter,” continues Virginie Viard. “I really wanted a particularly colorful collection that was very embroidered, something warm.”

Florals may not feel very groundbreaking for spring, but they still get a pass for fall. Fitting its artistic inspiration, the collection was shown on the steps of Paris’ stately Palais Galliera museum. While the delicate floral embroidery in hues of blue, purple, and pink took center stage, Viard still made room for classic Chanel black-and-white looks, including the bridal look worn by Margaret Qualley. 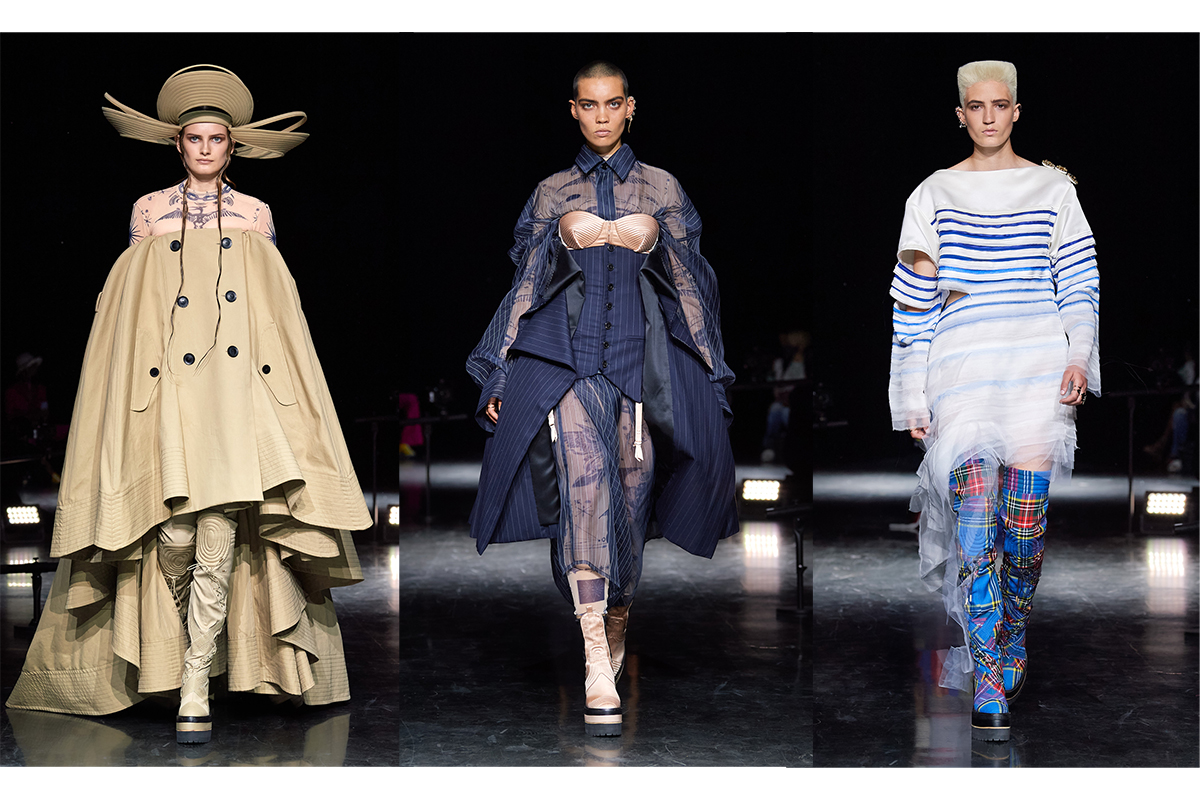 The cancelation of last summer’s couture shows was a particular blow to the house of Jean Paul Gaultier and its fans; as Gaultier himself stepped away from designing, the label was set to enter a new era with a series of guest designers taking on the couture reigns, starting with Sacai’s Chitose Abe. A year later, that collection is finally here, and worth the wait.

With a tightly-edited collection of 31 looks, Chitose Abe’s vision for the JPG universe includes her love of chopped up layers and plaids with his love of corsetry and sailor stripes. But Abe is not the only collaborator in this collection, as she also invited Pierre Hardy to create the shoes and Los Angeles tattoo maestro Dr. Woo to ink original prints for the looks.

The collaboration includes a ready-to-wear component as well: building on her many coveted launches with Nike, Abe has created two new pairs of Nike in collaboration with JPG (sure to sell out as soon as they drop), as well as a Dr. Woo-designed bottle of JPG’s famed Classique Eau de Parfum, and a set of tees, jackets, and leggings. 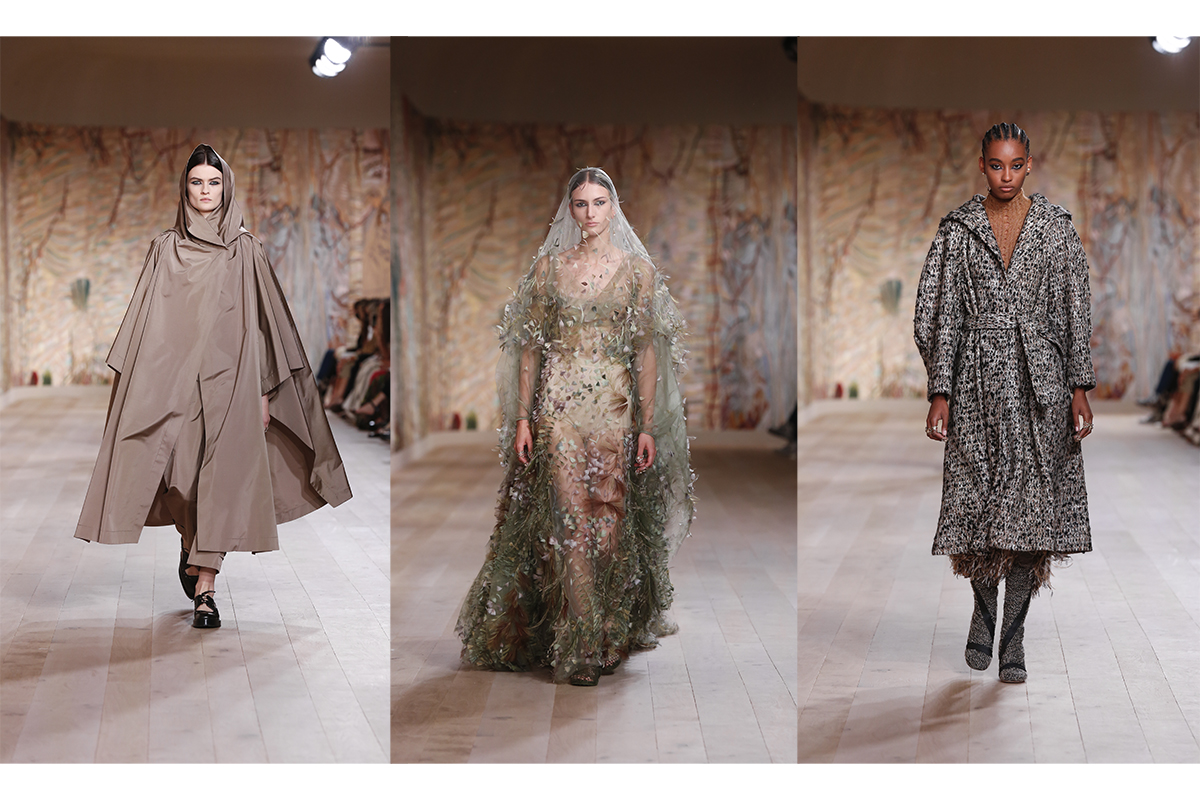 It’s time to be present, believes Dior’s Maria Grazia Chuiri. After a lack of in-person shows, Chiuri wants to focus on the senses, not merely sight, but touch. As such her vision for Dior’s newest couture collection is as much about sumptuous texture as exuberant looks. With houndstooth coats and gauzy dresses, the looks are covered, but invite you to come closer.

The embroideries extend to the backdrop as well, as Dior commissioned French artist Eva Jospin to create the richly textured backdrop. Titled Chambre de Soie, the original work is inspired by the Indian motifs in the Colonna Palace in Rome. The abstract work highlights the countless pleats, folds, and chains that make up this collection, which serves as a reminder that clothes are best appreciated up and close and in person, not through a digital presentation on screen. 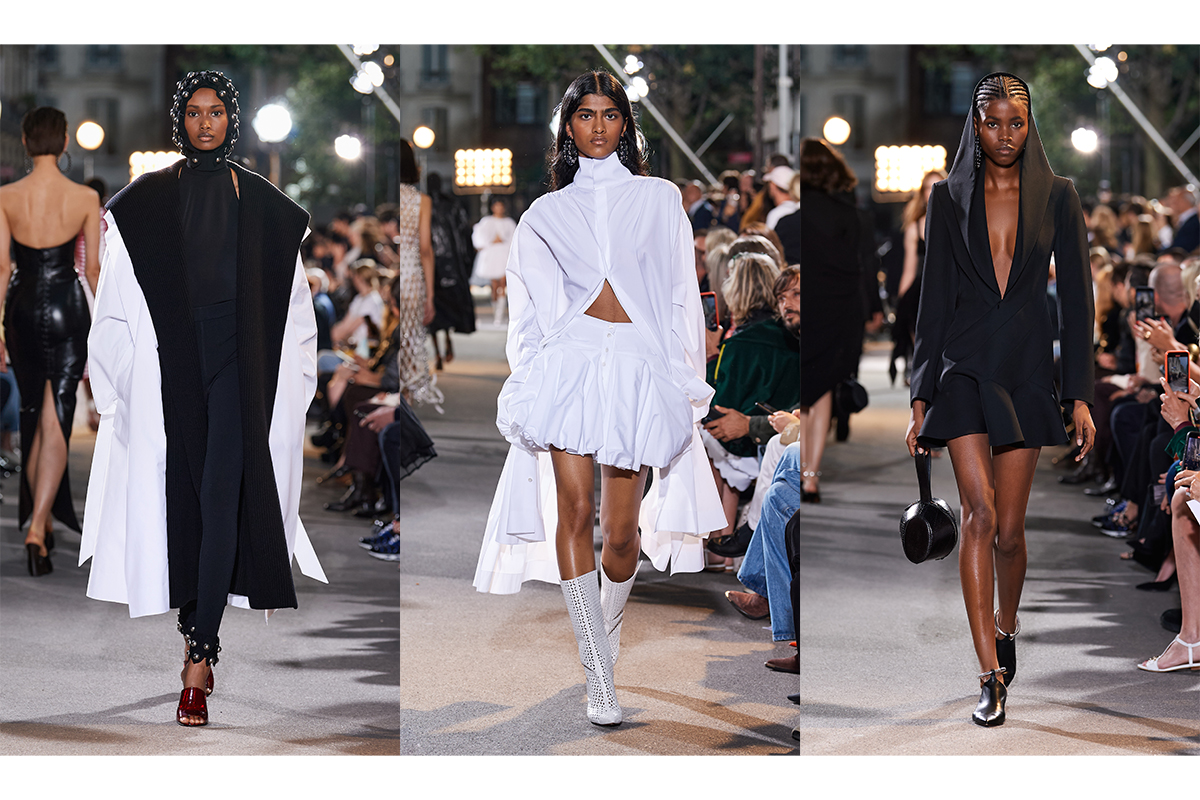 If there’s any label that has the right to stage a ready-to-wear show in the middle of couture week, it’s Alaïa. Particularly on such a momentous occasion as when Belgian designer Pieter Mulier is making his debut for the house, the first to follow in the footsteps of its late founder, Azzedine Alaïa.

Mulier’s showing was not only his debut for Alaïa, but also as a designer outside his partnership with Raf Simons. In homage to its founder whose passing in 2017 still feels fresh, the Winter/Spring 2022 collection (remember Alaïa was never one for the traditional fashion calendar) stuck to the house’s traditions, with slinky, body-conscious silhouettes in largely muted tones of black, merlot, red, and white. Well, except a mint green, knee-length furry coat worn by Liya Kebede. Because there is still room for fun in an otherwise austere moment.