WERE DIGITAL FASHION WEEKS JUST A FLASH IN THE PAN?

As Taipei and Shanghai host successful in-person fashion weeks, the rest of the world considers returning to the in-person calendar.

Since the first official fashion week in New York in 1943, fashion fanatics have been flocking to the world’s capitals in their glad rags to bear witness to live runway shows. What began as small, invite-only events rapidly evolved into visual and auditory sensations, with set designers, stylists, makeup artists, and even those in the front row becoming as pivotal to the show as the clothes themselves.

When the coronavirus hit, however, in-person experiences were quickly prohibited. In the fashion world, this began with the cancelation of Resort 2020 shows, which left industry veterans scrambling to put together digital alternatives to the spectacles we’ve become accustomed to. Environmental enthusiasts, however, were quick to brand the curveball a blessing in disguise: each season, the many influencers, celebrities, and editors traveling across the globe to attend shows wreak havoc on the environment, with many of their outfits eventually destined for landfills. Whispers rapidly emerged (similar to those suggesting working from home would be the new norm) claiming that in-person runways were vastly becoming a thing of the past, raising questions about whether or not our costly, elitist, bi-annual fashion calendars were necessary to begin with.

Now, as vaccines are swiftly distributed across the Western world and beyond, in-person fashion shows appear to be making a return. This development comes as a welcome relief to many. For those who rely on the physical aspects of events to earn a living, whom the pandemic economically devastated, it signifies renewed employment. 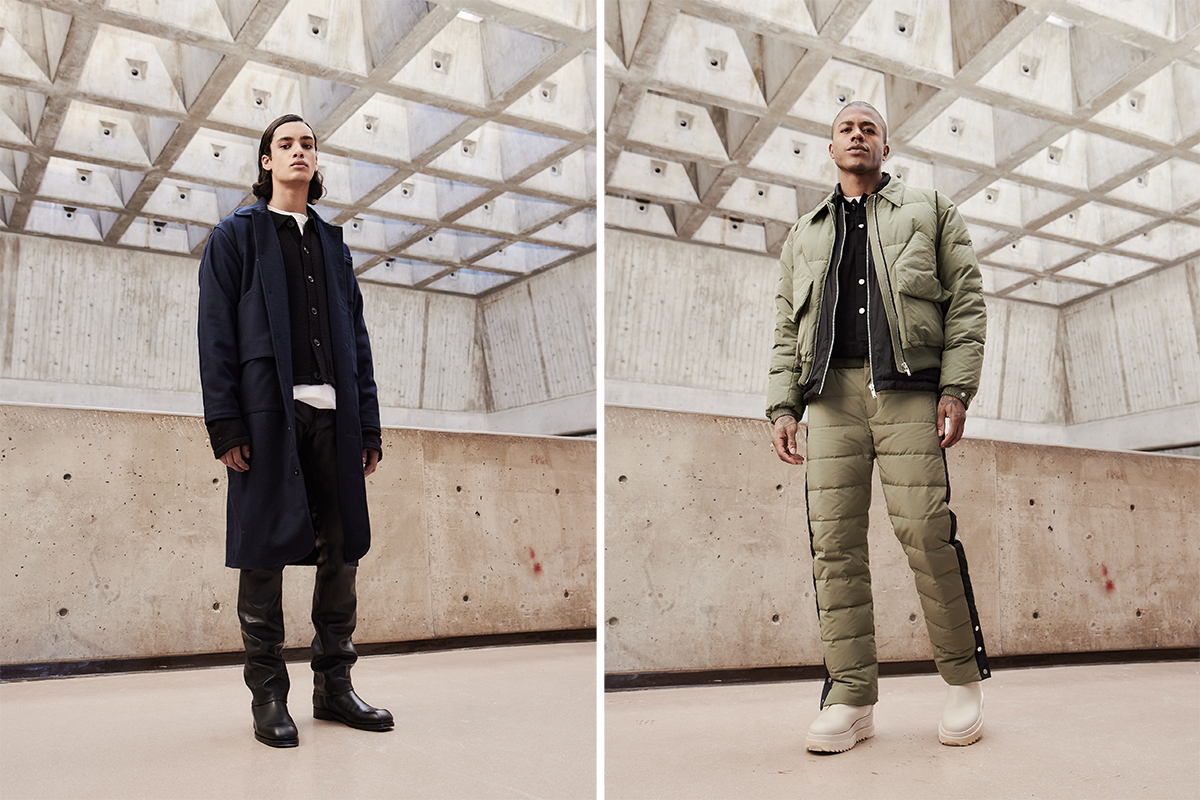 Taipei Fashion Week took place this March as the first in-person fashion week since lockdowns set in, with nothing but mandatory masks grounding the shows in a post-COVID era. Between shows, Taiwanese photographer Shouchih Lee captured attendees’ street style. “I feel lucky and very excited to be able to participate in the TPeFW and have the opportunity to witness the vibe of the city and people still have the passion for fashion,” Lee remarked over email to Mission.

Mandi Lennard, creative consultant and founder of Mandi’s Basement, has been involved in the planning of London Fashion Week events and parties for decades. Over email, Lennard told Mission that although she was floored by the virtual shows’ “immersive energy” and heralds how much time designers have dedicated to speaking to editors about collections over Zoom (a far cry from the bedlam of the rushed Q&As that take place backstage), she knows that “designers want to see their clothing move on a catwalk,” adding that “the word ‘Look Book’ seems so dated now.”

When it comes down to it, Lennard believes that live fashion shows are almost impossible to match, praising the moment “when all the minutiae come together in a precise symphony, which encompasses venue, soundtrack, casting, anticipation, sometimes scent too, and even that moment when the designer comes out to take their bow, the rush backstage, the electric energy from everyone being thankful they contributed to the overall production.”

Giulio Margheri, of design company OMA, was one of the minds behind the company’s collaboration with Prada in the form of a geometric faux fur-covered set for the brand’s women’s and men’s Fall/Winter 2021 offering. Over email, Margheri informed Mission that although designing sets and shows without the constraints imposed by “functionality and the public” offered certain freedoms, it can’t make up for the lack of ambiance provided by a live audience. “We miss the unfolding sequence of an event–the momentum and adrenaline around a space that is progressively developed, built and then experienced, not only by the models or the set directors, but by the public as well,” he admitted. 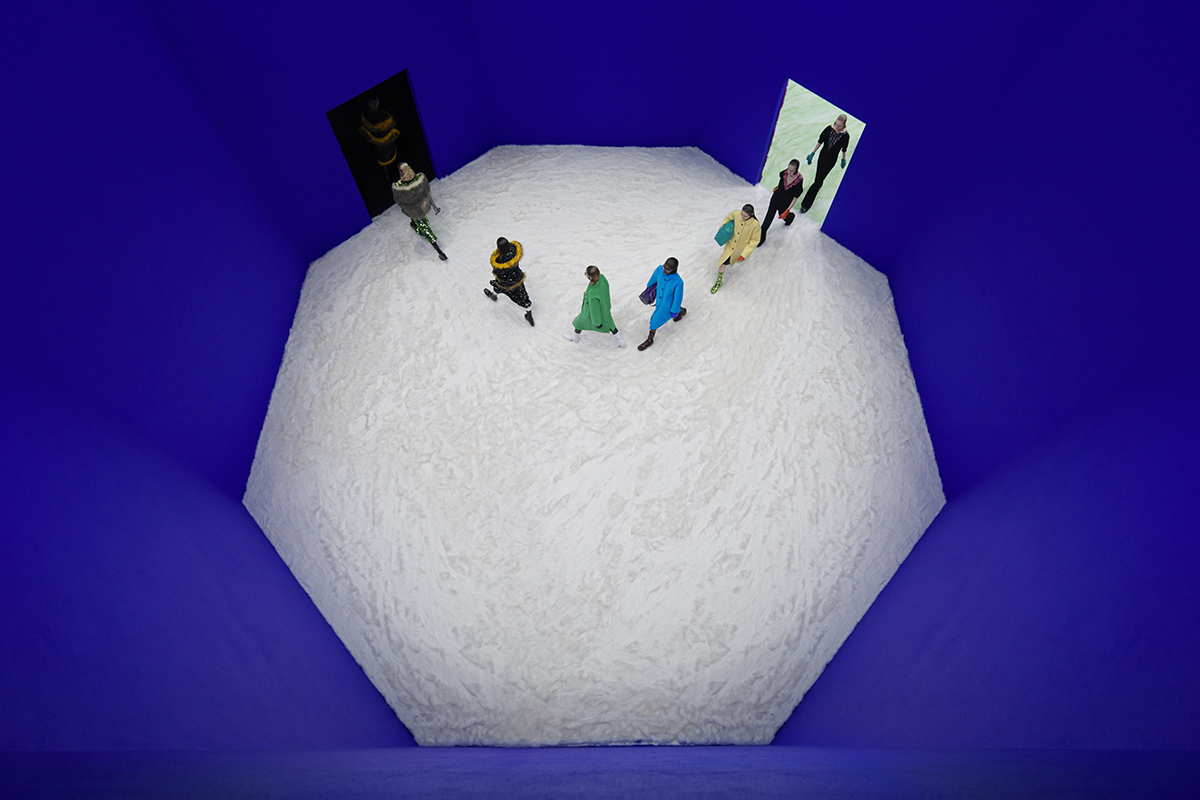 Unlike the designers who were forced to grapple with digital shows after years of hosting in-person experiences, Joey Gollish, founder of streetwear brand Mr. Saturday, had not yet hosted a runway show when the pandemic struck (his brand had, however, billeted a number of other tangible events). Although he believes in-person events are the foundation of Mr. Saturday, Gollish finds that fashion week going digital “leveled the playing field for emerging brands.”

“[It] gave us an opportunity to be seen in a way that might not have happened on a traditional schedule,” he said, “the freedom of expression in a digital presentation has also been a really interesting boundary to push.” Despite the digital realm’s advantages, Gollish is excited to host his inaugural in-person runway show, “That’s always been a dream of mine, I feel like what I’ve worked on during the pandemic has just been a warm-up.”

Earlier this month, Shanghai wrapped up its second in-person fashion week since the pandemic set in. Rows were jammed. Chinese umbrella company Labelhood auctioned off 6,000 tickets, which sold out in under three minutes. In both London and New York, fashion houses are reportedly making tentative (somewhat optimistic) plans for in-person shows come September, albeit they will likely be sprinkled with digital presentations. It seems as though the atmosphere at shows is simply too electric to pass up. As Lennard remarked, “You can’t underestimate the sensory feast of being at a show.”