Understanding the rumors and truths behind Judy Garland’s bisexuality.

The lives of Hollywood’s Golden Age stars often read like a well-crafted novel – the protagonist’s success as the inciting incident, and the rest of the plot arc focusing on the trials and tribulations that ensue. Each new acclaimed film or publicity stunt serves as a new chapter in the story, with new characters – managers, publicists, short-lived spouses – being integral to that chapter’s plot. However, often hidden in the endnotes of these stars’ lives is speculation surrounding the murkier, more unclear parts of the narrative. Dramatic events – affairs, accidental pregnancies, and questions of sexuality that are reserved for the tabloids become something of an urban myth in the lives of the Hollywood stars of yesterday.

One such story, rich in scandal and speculation, is that of Judy Garland (née Frances Ethel Gumm).

The starlet, who was just 17 years old when she was signed to MGM management in 1935, quickly became an important cog in the cash-crazy, publicity-driven Hollywood machine. Her management controlled nearly every facet of her life, from her diet, to her romantic relationships, to her medical prescriptions, ensuring that she could be controlled to depict the image they desired.

However, one thing the studio had little jurisdiction over was what went on behind closed doors. Garland, in all her Golden Age glory, was supposedly a closeted bisexual. Soaked in the spotlight, swathed in fur and dripping in jewels, Garland was often seen about town with many men of similar status to her, from studio execs to fellow movie stars, and was married a total of five times. However, as it emerged years later, Garland’s time was not entirely spent with the opposite sex.

Stories of Garland frequenting female partners are perhaps more than fanciful Hollywood recitals; most famously, she was linked to Betty Asher, an MGM publicity worker and close friend of the starlet. Although, as it came to be revealed, Asher was a spy hired by the studio to act as an unofficial duenna for Garland, to ensure the young actress did not go astray; what reportedly resulted from their relationship was much more than that. 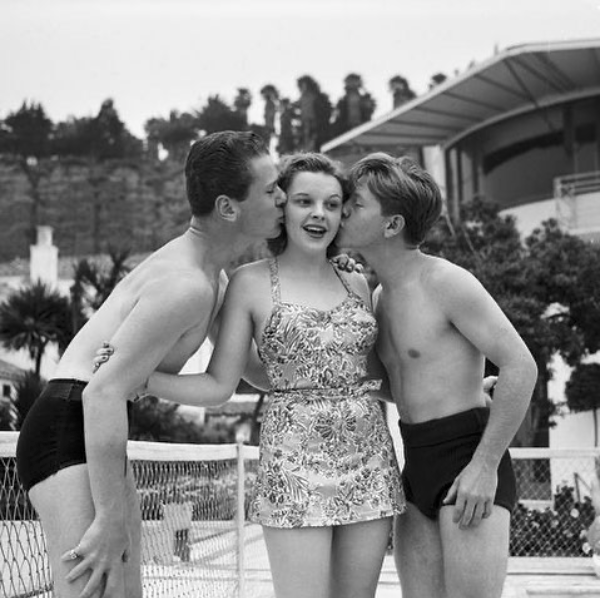 After Garland became infatuated with band-leader and Hollywood bad boy Artie Shaw, Asher was commissioned to keep an eye on her. The two allegedly became lovers before Garland became further entangled in an affair with Shaw’s best friend and underwent a subsequent abortion, all through which Asher supported her. In many accounts of Garland’s life, her bisexuality is mentioned, including David Shipman’s 1993 book Judy Garland: The Secret Life of an American Legend, in which the author details Garland’s relationship with “an unnamed woman,” who is presumed to be Betty Asher. “They were often seen together in MGM’s Arthur Freed unit, nicknamed ‘the fairy unit’ due to speculation of what occurred there behind closed doors.”

If Garland’s bisexuality was true, it was exceptionally noteworthy due to the environment in which it occurred. As previously stated, MGM held the reins on every aspect of her life – sexually fraternizing with the opposite sex was her equivalent of spooking the metaphorical horse with a rubber snake. It was an act of defiance, performing iconoclasm on the perfect MGM-approved version of herself, singing “it’s my party and I’ll kiss who I want to.”

For reasons possibly unrelated to her sexuality, Garland also became a gay mainstay via the code phrase ‘Friend of Dorothy,’ which gay men used to identify each other in the 50s (similar to today’s internet trend of young queer women of asking each other if they ‘listen to girl in red’). The term referenced Garland’s portrayal of Dorothy Gale in The Wizard of Oz, largely because Dorothy’s journey to Oz “mirrored many gay men’s desires to escape the black-and-white limitations of small-town life … for big, colorful cities filled with quirky, gender-bending characters who would welcome them.” Many aspects of her life and character are seen as cultural symbols for the gay community.

From the groups of gay men that would flock to her performances in the 50s and 60s, to her reverence as an iconic ‘camp’ symbol, to her either truthful or speculated bisexuality, Garland harbors meaning for the LGBTQIA+ community, and has left a legendary legacy of gay importance in her wake.