LEWIS G. BURTON ON THE MAGIC OF CHANGE

Lewis G. Burton is many things: nightclub owner and founder, musician, master subverter. Amidst COVID-19 and a changing world, Burton looks to the future.

“It’s just rained for the first time in three weeks,” they say, speaking from London. “It’s really beautiful outside.”

Burton is often drawn to the beauty of change. As a pioneer and protector of London’s queer nightlife scene, as well as an advocate for inclusivity, Burton thrives on challenging what society has dictated as beautiful and acceptable. The do-it-all club queen is the owner/founder of the disruptive queer nightclub INFERNO, a trained performance artist, an advocate for social justice, and a musician.

Now, Burton finds themself in a unique spot: What’s a nightlife virtuoso to do in a world without nightlife?

Given the astronomical risk of transmission associated with dancing and drinking in enclosed spaces, COVID-19 slapped a suckerpunch moratorium on nightclubs and social spaces worldwide. Burton, who thrived in the shadow and light of London’s electric nighttime, misses the setting dearly, but feels this period of rest is important.

“I was having a bad time, many people were,” they say. “It’s given me that time, that space to go inward and do some self-reflecting … I feel grounded and I feel recharged.” Journaling, painting, and writing have kept Burton artistically fulfilled, while ushering in a period of introspection. 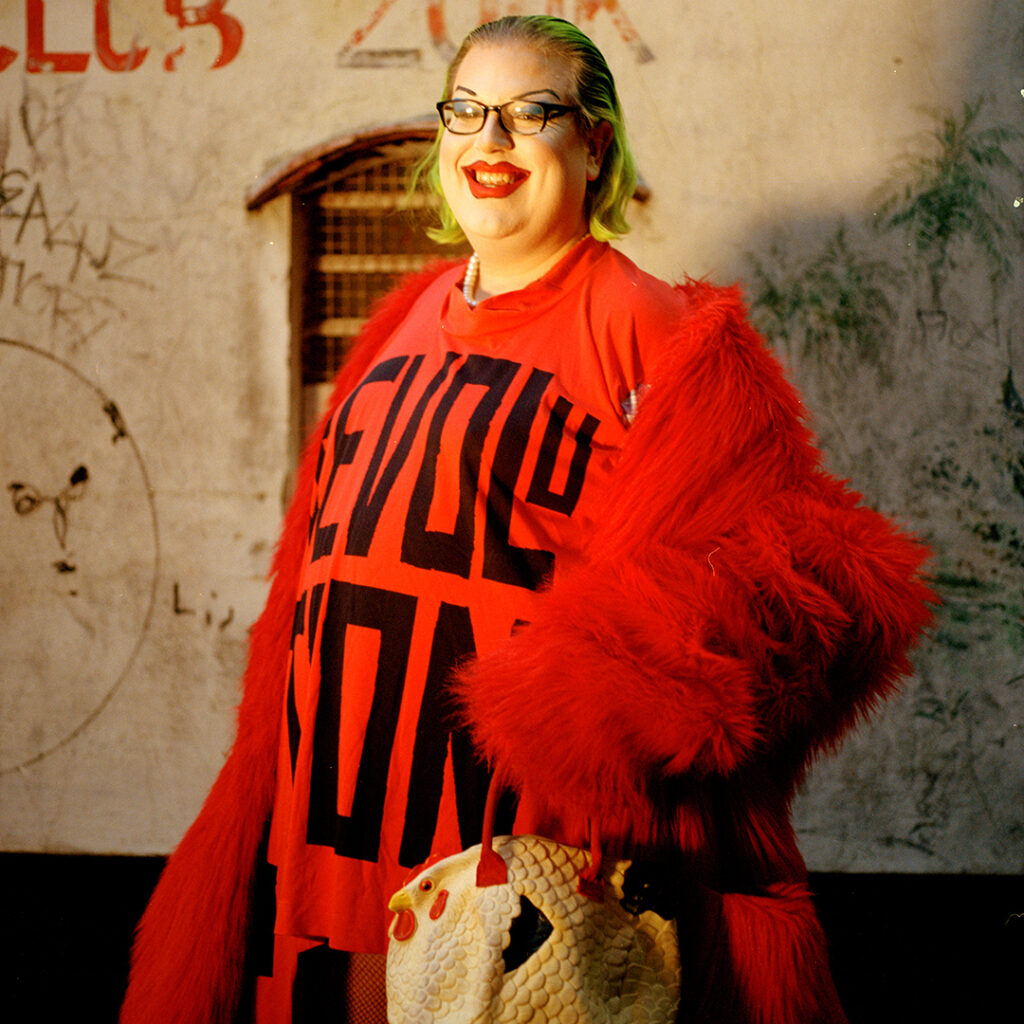 Despite strides in self-fulfillment, Burton still worries about the larger LGBTQIA+ community in a time without physical queer social spaces. “There’s always been such a rich history of queer people running away from their little villages and towns to bigger cities and finding community and chosen families within nightclub settings,” they say. “It’s a really difficult time for us right now.”

A large part of what drove Burton to advocacy and art was a desire to help those who are younger and newer to exploring queer nightlife and identities. “I’m quite a nurturing person,” they say. That’s one reason why Burton ensures INFERNO provides a platform for those who don’t find much representation within nightlife performance spaces, specifically championing transgender, female-identifying, and non-white DJs. “There’s an oversaturation of cisgender, straight, white men in DJing,” Burton says. While INFERNO’s physical space may be shut down, its social media channels keep its connections to the queer community alive, releasing playlists and offering up its platform to takeovers.

But Burton’s activism extends far beyond the dance floor.

Annually, Burton orchestrates an INFERNO summit, made up of discussions regarding pressing queer issues, workshops, and showcases of LGBTQIA+ and feminist artists. “As much as I love nightclubs, there are a lot of things that come with that like the drinking and the drugs,” Burton says. “I think it’s important that we have a space outside of the nightclub. There’s so many people in the community who are sober … it’s good to make sure they feel included.” Burton says this year’s summit will be all online, likely streamed and presented on social media, sometime in November. 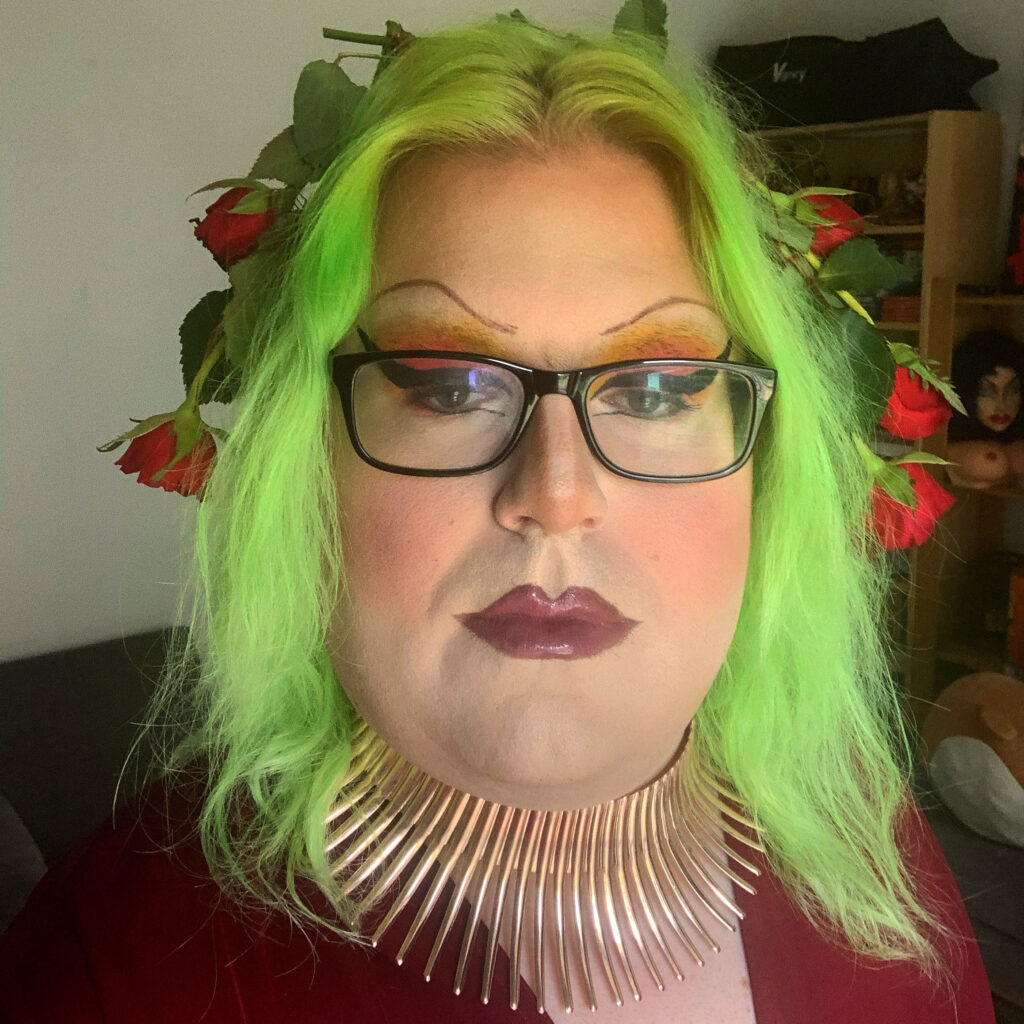 Another pillar of Burton’s persona is representation. They identify as gender non-conforming (“I’m on a journey with my gender,” they say), and Burton, whose daily uniform usually consists of slime green hair and eye-popping ensembles, rarely saw people like themself growing up. “I grew up with a lot of shame and a lot of self-loathing,” they say. “There was no representation on TV or in the media growing up in the ‘90s.” It wasn’t until college when Burton was exposed to other queer artists and discovered a love for the camera.

This exploration of identity is apparent in Burton’s works, like their EP Hermaphrodite, which was released last November. The video, which was produced by other-worldly duo Fecal Matter, flirts with ancient mythology, fatness, gender fluidity, and the unsettling, all themes that play a recurring role in Burton’s artistic perspective. “There’s something really beautiful in the grotesque,” they say. “There’s some true beauty and some honesty in it.” Burton’s upcoming music video for their EP Men Like You, as well as their two EP’s dropping around the end of the year, are likely to continue excavating and manipulating the boxes society places us in.

As our call wraps up, Burton tells me they keep their head up in hard times, pandemic or otherwise, by looking to the queer youth: “The kids [are] so fearless and so brave and so determined to change the world.” For the change-loving nurturer, the younger generation is a constant source of inspiration.

With a crackling laugh, they say goodbye and Burton hangs up, once again eager to embrace the change of a freshly rain-soaked London.