THIS MOTEL TAKES IMMERSIVE THEATER TO ANOTHER DIMENSION

On East 4th Street in the downtown Los Angeles Arts District, near the ordinary sights of a dog park and a gym, exists a portal to another dimension. Occupying 17,000 square feet and themed as a restored 1960s motel, The Madcap Motel reimagines immersive art and theater through a magical wormhole, hidden passageways, and 18 distinctly decorated rooms.

Tickets are $40 for adults and $30 for children, but the theatrical performers you encounter inside will tell you that human concepts like time and money do not exist in The Madcap Motel’s secret dimension, titled “Elsewhere.”

“Truly immersive experiences are a blend of different art forms that all work symbiotically to create the bigger cohesive piece that is the experience,” Madcap Motel lead project builder and engineer Jeff Hopper said. “In Madcap, the storytelling is done through the theatrics, visuals and sounds that all flow together to help pull the guest out of their element and into elsewhere.”

The attraction is distinct in that personal photography and videography are encouraged, drawing in influencers and social media gurus. Guests can pose standing in front of Instagram-worthy sets—ranging from floating furniture to colorful light projections—or seated inside oversized art installations. However, director of operations Michael Kelly says the experience goes far beyond the photo ops.

“While our photo-friendly 1960s motel is designed for a content driven world, we value the spark of a genuine feeling over an Instagram photo,” Kelly said. “We built a fantastical script and an intricate building, but the staff and immersive cast bring it all to life by creating whimsical realities through human connection and vintage storytelling. Like a magician, we hover close enough to reality to make you believe in the impossible.”

Each Madcap visitor can follow their own individualized path through the exhibit, as the experience is built around the model of “choose your own adventure.” There is no specific order that guests adhere to when they explore the 18 themed rooms.

“At Madcap Motel, there is no time limit or tour guide forcing you through the experience to hit a predetermined metric,” Kelly said. “If the goal were to quickly profit from a churn-and-burn popup, we would’ve made different choices, but our business and creative goals are aligned in their long-term approach. Open any door and choose your own path; our mission is to bring child-like wonder to the mundane adult world.” 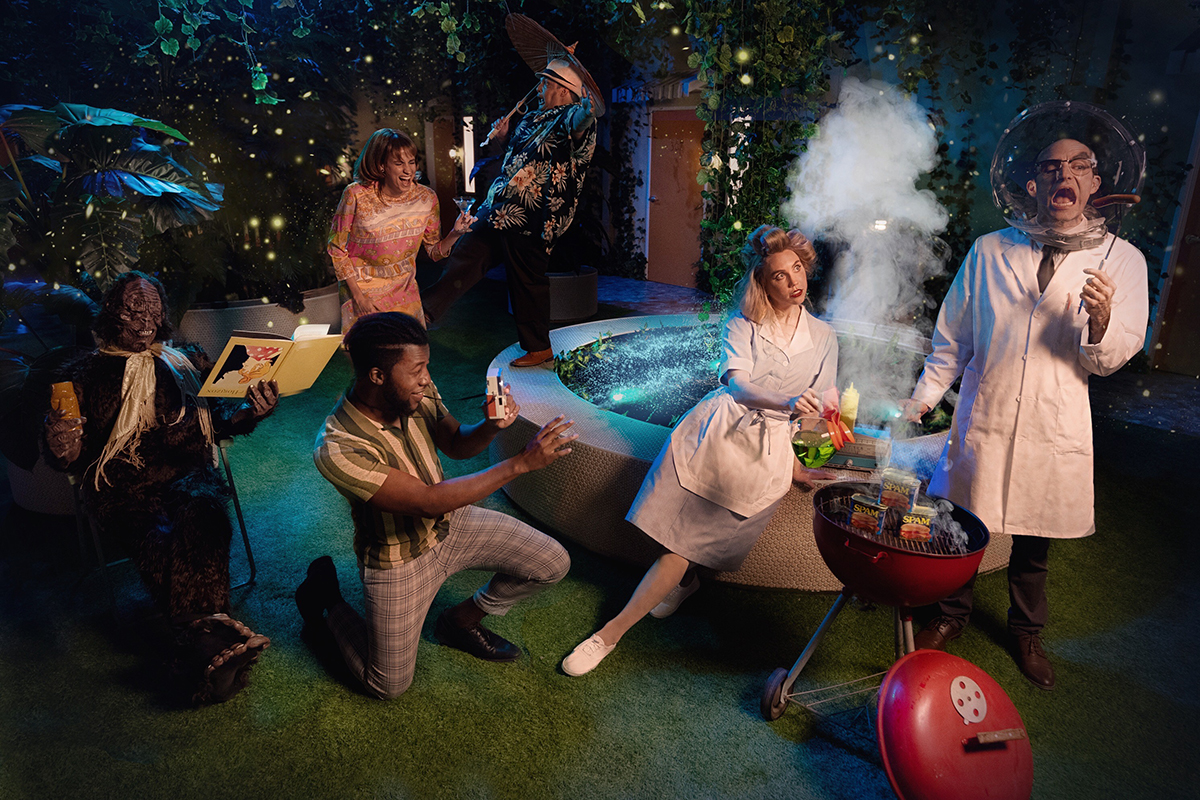 It’s an interactive experience, as visitors are treated like “residents” of the motel and converse with actors, flip buttons, and switches, and narrowly escape a hungry hedge person—a Disneyesque moving bush with quite an attitude. The atmosphere is grounded in retrofuturism reminiscent of Disneyland’s Tomorrowland and the utopian aesthetics of 1976’s Logan’s Run.

“When we came up with the idea of the motel, we wanted to pay tribute to the nostalgic and Americana culture associated with the heyday of motel travel,” founder and creative director Paige Solomon said. “We also wanted to set ourselves apart visually from the bright and pop-y Instagram playgrounds we have seen all over our feeds for years and lean more into a mid-century modern aesthetic that would lend itself visually to our sci-fi inspired narrative.”

To accomplish this, Solomon turned to influences such as 1988’s Beetlejuice, 2014’s Interstellar, and 2003’s Big Fish. Madcap Motel combines its retrofuturistic personality with rich storytelling elements and an emphasis on interactivity.

“The experience starts off as a linear storytelling experience,” Solomon said. “Our first motel room, #433, comes from our guiding principle of making each room 40 percent interactive, 30 percent weird, and 30 percent fun. However, once guests are transported into Elsewhere, via wormhole travel, the experience becomes more choose-your-own-adventure.”

Several performance roles are filled throughout the attraction’s 18 rooms, ranging from eccentric travelers staying at the motel to mischievous housekeepers lurking behind each door. According to director of theatrical experience Claire Chapelli, Madcap employs “the best in town,” sourcing through local networks in the immersive theatre community. Members of several immersive theater companies in Los Angeles work at Madcap, including those from The Speakeasy Society, JFI, and Ceaseless Fun.

Madcap also provides work for actors during the pandemic, as higher-capacity performance spaces like theaters remain closed nationwide. According to Chapelli, these actors come from a variety of backgrounds, including traditional theater school, the horror/haunt world, and theme parks.

“After a hard year of all live events shutting down, most of our staff did not just lose their job at Madcap, but multiple sources of income at once,” Chapelli said. “I feel so grateful for the opportunity to provide a space where my collaborators and friends can do what they love, particularly after such a tough time in the industry.”