MAKEUP BRUTALISM MAY BE THE ANTIDOTE TO SOCIETAL BEAUTY STANDARDS

Artists are embracing digital distortion and off the wall makeup to redefine beauty.

At its inception, Instagram offered users the chance to share their personal experiences in a more photo-centric way than any other app on the market. Users’ penchant for self-portraiture led to a rise in selfie culture, shortly leading to the filter era whereby realistic, ominous digital enhancements offered users bigger lips, clear skin, and defined cheekbones. It became clear that Instagram was simply reinstating the beauty standards that media and advertisers had been promoting for decades.

Enter makeup brutalism, an appellation coined three years ago by makeup artist Eszter Magyar as a play on brutalist architecture. Like its architectural counterpart, brutalist makeup (or at least Magyar’s version of it) appears rough and unfinished, moving away from what has been historically considered aesthetically pleasing. In the place of rough edges and unfinished-looking concrete structures, brutalist makeup offers the likes of clumpy painted eyelashes and weeds sprouting from eyelash roots. “I’m in love with architecture, I always was – and brutalism is one of my favorites because it’s raw, honest, and was something new and fresh back then,” Magyar tells Mission of her artistic catalyst. Magyar’s refreshing approach to makeup (she describes her work as “social criticism”) eventually garnered her over 110,000 Instagram followers and a contract with Gucci Beauty.

However, despite her success, Magyar is aware that like its architectural counterpart brutalist makeup isn’t for everyone. It rallies against what we deem attractive, and therefore finds criticism from those committed to the status quo. “People often don’t get it, do not see or understand the reasons behind the aesthetic, so just label it ugly,” she says. Despite the haters, experimental makeup does appear to be slowly starting to make a splash in the mainstream market. 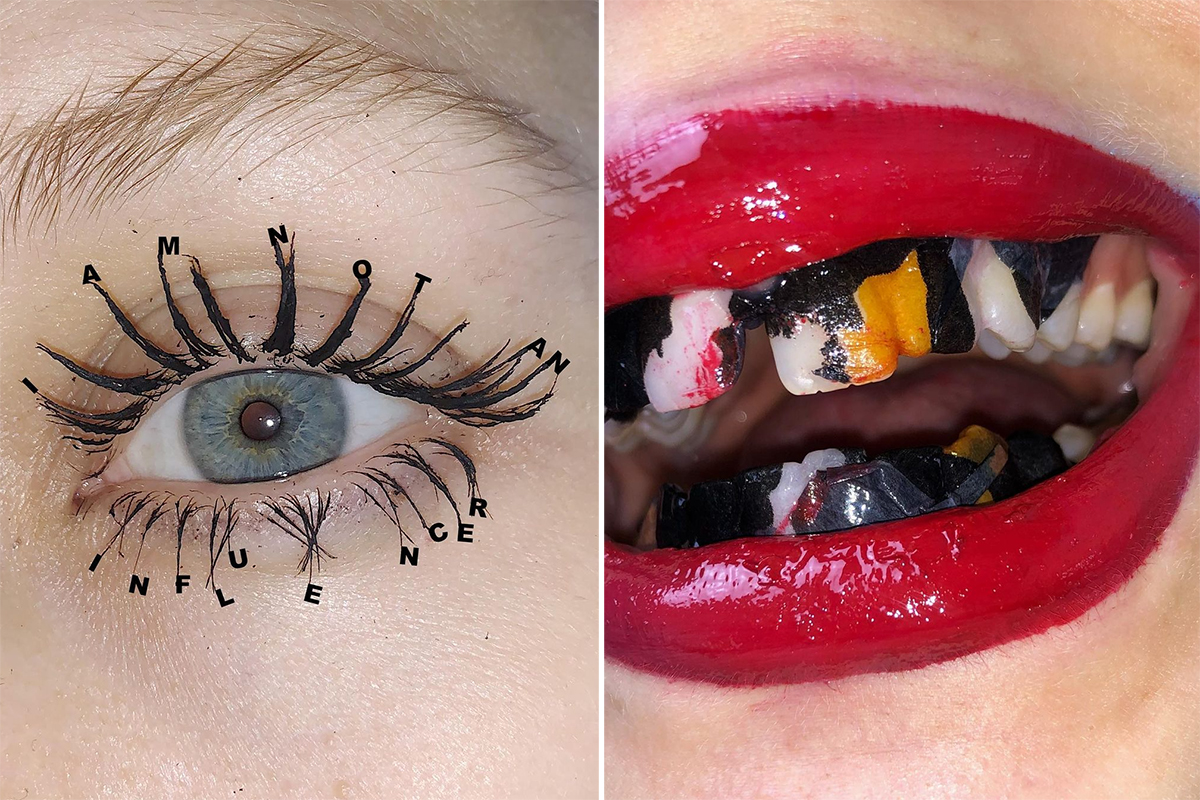 But Magyar’s end goal isn’t a world where more people adopt her avant-garde beauty aesthetic. Instead she hopes that one day “makeup reaches a new level where it would be free from social pressure, that would be the real freedom.”

Another artist and avid Instagrammer embracing the vanguard beauty aesthetic is Gucci collaborator John Yuyi. Yuyi accumulated a large following thanks to her social-media-oriented temporary tattoos. Like Magyar, Yuyi harbors concerns about the beauty standards that prevail online. “Digital advancement did beautify people on the internet. People have millions of followers living a life that looks perfect behind filters, Facetune, and Photoshop,” she says. However, the artist is optimistic about the experimental possibilities it offers, “I also feel that digital advancement brings forward the voices behind different standards of beauty.”

Digital distortion is one of the key proponents of Yuyi’s work. One collaboration with software company Software2050, created using Artificial Intelligence, sees Yuyi’s face stretched into inhuman contortions. Another image, commissioned by King Kong magazine, stretches out her eye into a distended cube. An earlier project features a facially-warped alien-like creature, captioned “beauty standard in Neptune,” a nod to our culturally enforced perception of beauty.

Although Yuyi is aware that the digital realm has a colossal effect on our reality, she worries that distortive aesthetics and makeup experimentation may never override traditional beauty standards. “Biological settings and society gave us the ‘pretty’ standard,” Yuyi admits, “but I’m happy to see more diversity.” Magyar, on the other hand, has a different goal in mind. To her, brutalist makeup isn’t really absurdist at all; instead, it’s our perception of beauty that’s warped. In the words of Austian psychologist Viktor Fankl, she notes, “an abnormal reaction to an abnormal situation is normal behavior.”