‘GRAND ARMY’ IS A REFLECTION OF TEENAGE CULTURE AT LARGE

We speak to one of the show’s stars Maliq Johnson on why being a teen today is about understanding privilege and using your voice.

If you have yet to watch Netflix’s Grand Army, which premiered in mid-October, do yourself a favor and start binging. While the first season of the show features only eight episodes, it takes us on a trip through the eyes of five teens attending Grand Army High School in Brooklyn, New York. The contents of the show are salient, relevant, and all too real, making it quite clear that being a teen today is not just about Instagram and house parties – it’s also about protests, understanding privilege, and using your voice.

Of the five main characters profiled in the show (all of whom have their own story arc), Jayson Jackson, played by Maliq Johnson, has one of the most chord-striking story lines of all. Throughout the first season, we watch as Jayson and his friend Owen, both young Black high school students and musicians, face suspension over a minor infraction. What follows is an exploration into the Black student experience, and how differently something like a school suspension can affect a Black student versus their white counterparts.

“It was hard to not get emotional when I first read [the story of Jayson and Owen],” Maliq tells me over the phone in late December, still riding the high of the show’s recent premiere. “It’s such a reflection of my life and the lives of so many other people.” 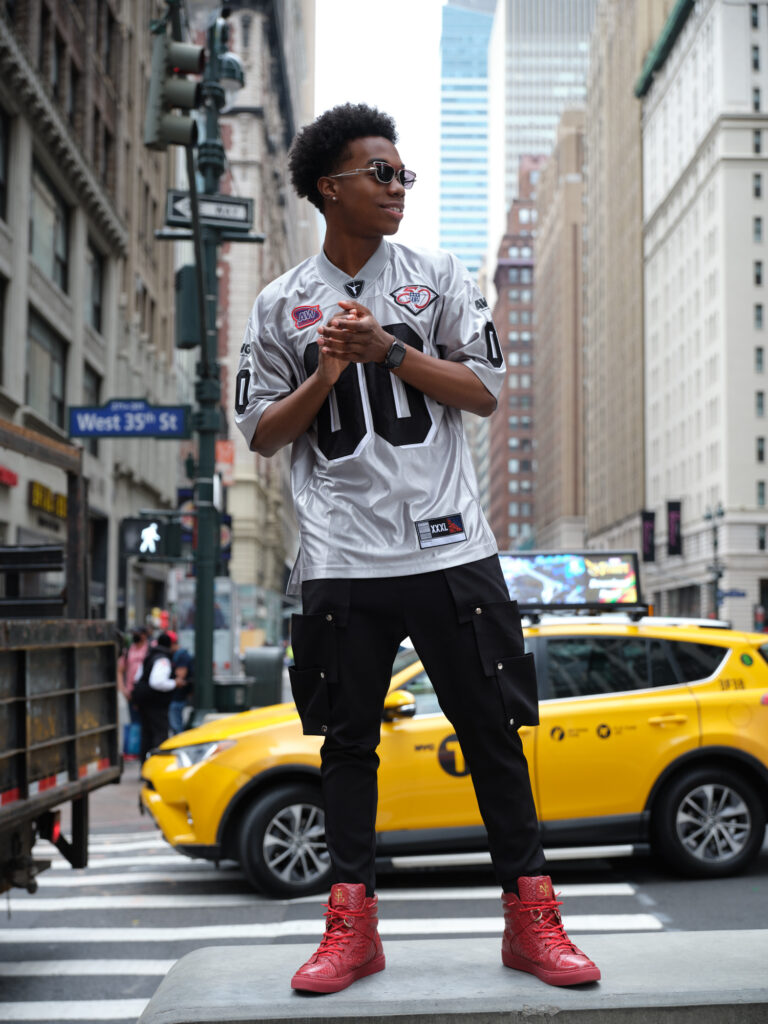 What Johnson makes clear to me over the course of our conversation is that this story is not an isolated one. “Jayson is me; I am Jayson. He’s somebody I know, he’s my little brother, he’s somebody I could walk outside right now and see.” The story line, put specifically in the context of school suspension and its adjacent issues – racism, equal opportunity (or the lack thereof), the school-to-prison pipeline, etc. – reflects an experience had by many.

Perhaps the best example of this is the time during which Grand Army was shot and set. Although the show was shot from May to September 2019, it aired  in October 2020, and was set in March 2020. Despite this discrepancy, the events depicted in  the show – protests and sit-ins surrounding the unfair treatment of Black students, the loss of opportunity following an unfair suspension – remain as relevant as ever. “The show was based on something that would’ve happened in the past [at the time of airing], but the things that happen in the show are things that could’ve happened after the show came out. It’s history repeating itself […] in such a negative way.”

It’s this truth that Maliq explains motivated his performance in the show: “When you’re asked to portray this message that is so real and important to your own life, you have no other choice but to do your best.”

It’s in the final shot of the season, where we see Jayson performing at the Lincoln Center in the place of Owen, who was suspended, that Maliq’s authenticity shines through. When Jayson’s turn comes, to play his saxophone solo during John Coltrane’s ‘Alabama,’-  an infamous eulogy hymn for the young Black girls killed during the 1963 Ku Klux Klan bombing of a Birmingham church – Jayson instead stands up, places a piece of tape over his mouth, and raises a fist. The impact of the first season’s scene is undeniable, and even more so when Maliq explains that he wasn’t simply acting.

“Something came over me [while we were filming the scene] where I thought about everything Jayson was going through, alongside things that have happened in my own personal life – racial discrimination, run-ins with the police, my friends being suspended,” Maliq says. “I could wear my emotions on my sleeve and it felt good to show everybody my pain.”

Maliq goes on to stress the importance of allyship. “[Allyship] comes with true understanding of race and consequence and [putting yourself] in someone else’s shoes to understand how things affect them differently. Not telling people how to feel about situations you don’t understand,” he explains.“My mission is not only to provide new perspectives, but to provide inspiration for people. I want to help people learn because I’m still learning myself, and when we start having [these discussions], we can help each other become better people.”