How TikTok virality and national attention helped these Manchester students get £12 million back from their university.

Students at Manchester University in the U.K. have just achieved a colossal win for student rent strikes. After much tension and intimidation, a 30% reduction in rent has been agreed upon for each student, roughly amounting to £12 million in total. During their protests, eight riot vans were called to a demonstration, fences were put up around campus to keep students in, campus security slammed a pizza delivery onto the ground (which has gone viral after being filmed and posted on TikTok), and acted violently towards a Black student who they accused of “looking like a drug dealer.”

University rent strikes have cropped up in several universities across the U.K. due to living conditions exacerbated by the COVID-19 pandemic. At the beginning of this academic year, students in some universities were forced to stay in their accommodation and weren’t allowed to go outside nor receive deliveries, leaving them unable to get any food. Many universities also closed off communal kitchens and living spaces, instead offering their own catering services that offered simple meals for much more money than they were worth. A collective feeling quickly spread among students that they were coaxed into attending the universities during the pandemic to shore up finances despite the risks to their physical and mental health – giving way to protests organized by various student groups.

Three months later, this year’s first win was achieved. Izzy Smitheman is a first year student at Manchester who joined eight other students in occupying Owens Park tower, a university building, as part of the protests against the university’s disregard for students’ health, safety, and finances during the pandemic. “Around September we noticed there was a lot of dissatisfaction among students and that we’ve been lied to,” she says, referring to the promises made to students that returning to universities would be completely safe. “We had very little support from the university. From that a few of us set up the rent strike, and we launched quite a big social media campaign to try and get people to withhold their rent.” 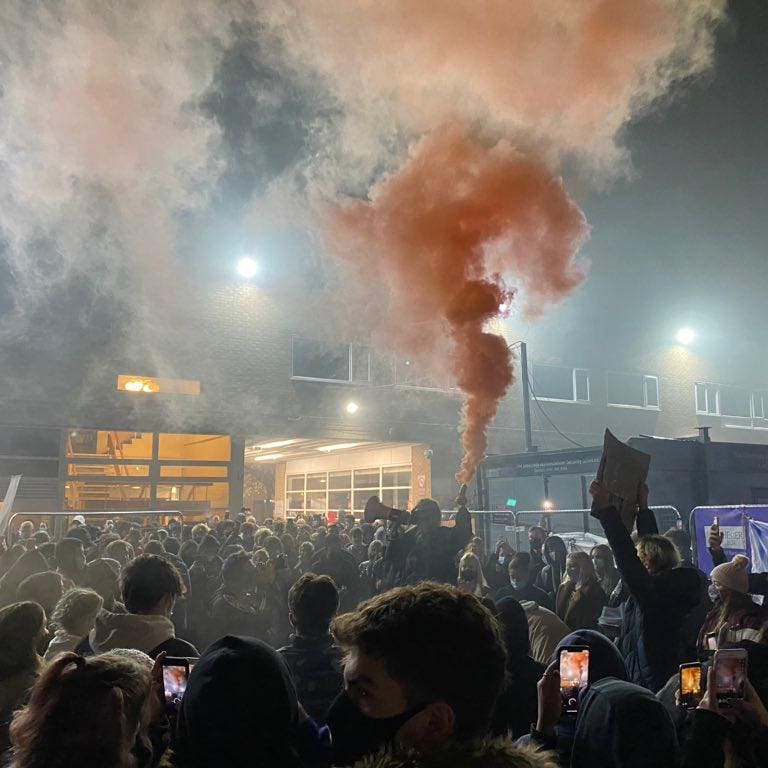 The campaign’s demands not only included a rent reduction, but also better support for Manchester students – starting with food, laundry, and post for isolating flats, as well as better responses to complaints about living standards. On the campaign’s Instagram page, multiple students reported rat infestations, regular and long periods of no heating, and broken sinks, fridges, showers, and ovens. The rent strike began with over 200 students participating, although Izzy says it was ignored at first. “The date to pay the rent came and went, and the university basically just ignored the fact that over 200 people were politically withholding their rent. From there we had protests on Fridays, but they still refused to listen, and I think one of the main catalysts was when they put fences up around the university halls, which launched a mass protest and a lot more anger among students,” says Izzy. “So a few of us decided we’d occupy a building until the university came out and spoke to us.” The tower occupiers entered the building 3 weeks ago through an open window, and stayed for 2 weeks until the university agreed to their demands. “On the first night we had some pizzas being delivered to us and the security guards just slapped it out of the hand of the person delivering it to us, and then they cut off our WiFi as well,” she says. “So at first it was pretty rough, but after we got national attention. I think the university knew they couldn’t keep treating us like that, so they let us have all the food and supplies. For most of the 2 weeks we got plenty of food and supplies in.”

In response to those who might not support their cause or methods, Izzy says, “I think it’s really hard for a lot of older people to understand how it is for the students. We were lied to and we were brought here, we are paying extortionate amounts of money, at the end of the day that’s our money, that’s our student finance loans, so if we decide that the university has broken its contract by not supplying adequate accommodation then we’re also going to break our contract and withhold rent. I think the fact that we won shows that it’s not stupid.” Now that they have won the 30% rent reduction for this semester, they plan to continue rent striking into January with even more universities than before, aiming to ensure that students are still fairly compensated for the next semester. “I think that what we’re standing for is a lot bigger than just one campus and one university. It’s about the very way that universities exist largely for profit and I think that affects every student at university and higher education paying ridiculous amounts and then not being treated as human.”