MARSHA P. JOHNSON: INTO THE WARDROBE

A look into the life and wardrobe of pioneering LGBTQIA+ icon Marsha P. Johnson.

It takes a remarkable type of person to live the way that Marsha P. Johnson did.

Her story, in which she assumes the role of friend, performer, activist, and hero, has proven to be more richly intricate than was originally thought, thanks to the coverage and praise it has received in recent years. Having been the subject of numerous works including biographies, op-eds, and even a Netflix feature film, it is doubtful that many are unfamiliar with the story of the peace-disrupting activist. Works such as this belated obituary tell her life story in a chronologically to understand her many accomplishments and provide context to her achievements.

Likewise, her enigmatic and timeless style has also become a fixture of inspiration and inspection.

Marsha ‘Pay It No Mind’ Johnson was a Black gender non-conforming individual in the 1970s and ‘80s who lived in New York City. Marsha never referred to herself as ‘transgender.’ Rather, she occupied the interstice between masculine and feminine identities. While she was called a drag queen by some, she did not stylistically perform ‘high drag’ – Marsha was known instead to make do with what she had. She was often seen wearing flower crowns she’d constructed with discarded flowers from her makeshift dwellings in Manhattan’s Flower District, as well as mixing traditionally masculine and feminine clothing that she collected. Likely, that’s all she had access to at the time.

Marsha’s tenacity was a catalyst not only for the way she dressed, but the way she lived. Upon moving to New York at 17, she quickly found solace within the city’s gay community, and was free of the restrictive shackles of her conservative past life. Not only did she fit into her new environment, she ascended to the forefront. She led in such a way that earned her unofficial titles like ‘the Rosa Parks of the LGBTQ+ Movement,’ ‘Queen of the West Village,’ and ‘Mayor of Christopher Street.’ She is most famously credited with throwing the first brick at the Stonewall Riots of 1969. She carried the momentum of these triumphs to projects such as the S.T.A.R. (Street Transvestite Action Revolution) house, a shelter for homeless LGBT youth in lower Manhattan. Marsha, alongside fellow Stonewall renegade Sylvia Rivera, acted as the ‘drag mother’ of S.T.A.R. house, offering counsel, support, and open arms to the youth that occupied it. Wherever Marsha walked, a spotlight seemed to follow— both a blessing and a curse for the young dissident. Loved and revered in her neighborhood and city, Marsha thrived onstage and in the spotlight, performing with NYC drag troupe the Hot Peaches, as well as East Coast troupe The Angels of Light. 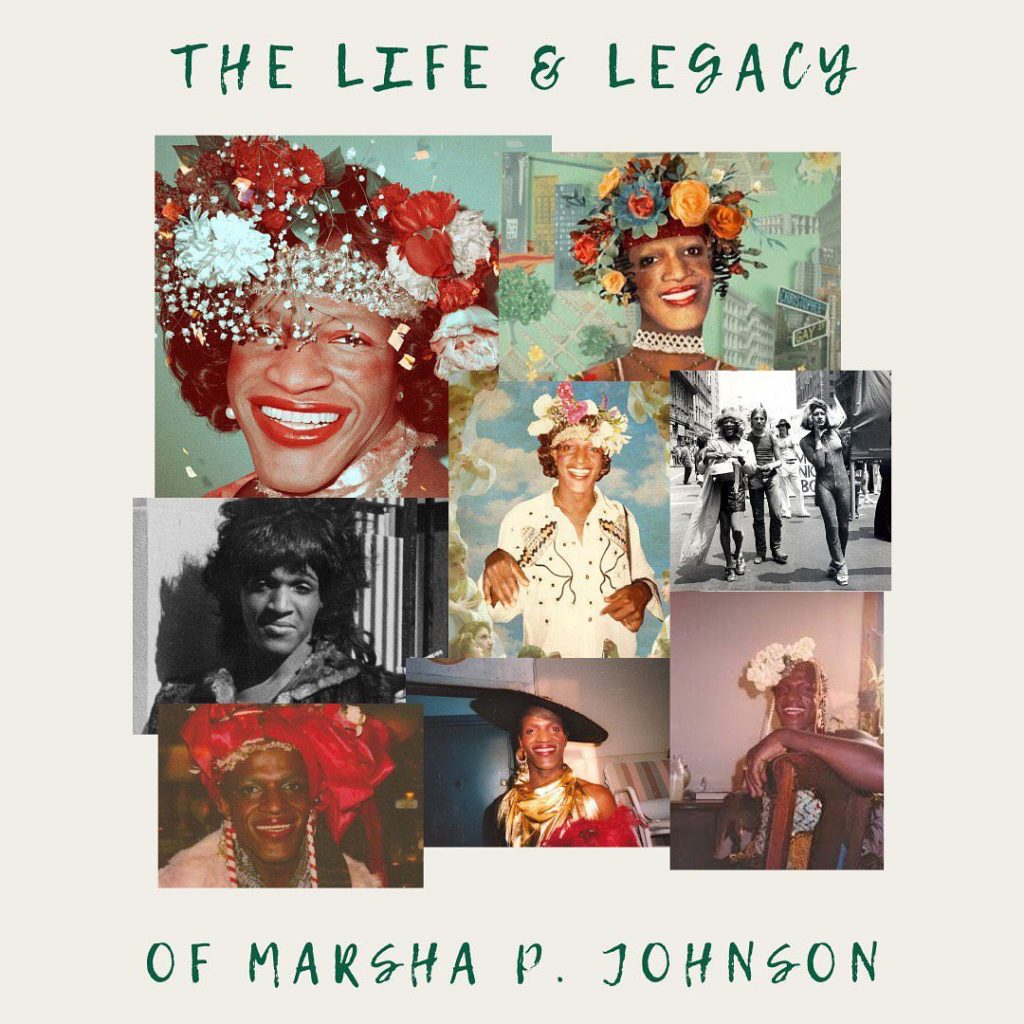 However, as it often goes for transgender women of color, Marsha existed at the mercy of the streets, which posed a variety of threats, many of which were beyond her control. While she thrived in the space she had created for herself and others, she also faced grisly realities.

Marsha’s life was not all flower crowns; she struggled with mental illness, a topic that is sometimes overlooked in the black transgender community. She engaged in prostitution as a means to provide for herself, and thus was the subject of assault and abuse. While these factors do not define Marsha, they are worth mentioning in the context of her life story.

Marsha was a shining image of perseverance. It can be said that she approached her life as something she could leverage, something she could make use out of, with exorbitant amounts of bravery and optimism. Almost every movement she made was chaperoned by threat: moving to New York alone and nearly penniless at the age of 17, existing not only openly, but unapologetically, as a transgender woman of color, marching at the forefront of the LGTBQIA+ movement in a time where no such thing openly existed.

So, while Marsha’s clothing is not the focal point of her existence, it is certainly a relevant factor in her identity as an activist. Fashion as activism is a somewhat disputed topic. We often ask, is fashion all vanity, or can it be used to make a larger statement? In Marsha’s case, her clothing was more than a statement, it was a manifesto. The clothing she wore and the persona she unapologetically embraced embody a scaled down version of what she fought for, and what the LGBTQIA+ movement constitutes: individuality, bravery, pride, and community.

There are few historical figures quite as memorable as Marsha, and few as deeply missed. While her time serving her immediate community was short-lived, her bravery will forever serve the LGBTQIA+ community as we know it. Perhaps only in retrospect can we truly appreciate her actions and understand how far we’ve come, all thanks to riots, flower crowns, and one Miss Marsha P. Johnson.