“Just for the generations to come, I want them to know it’s ok, no matter who you are or what you do, you can still be the best at it.”

Mission recently partnered with Nike for the launch of their BeTrue campaign accompanied by a powerful film, the release of which coincided with the launch of our LGBTQIA+ issue. This week, we spoke to Erica Bougard, 4x USA Indoor/Outdoor National track and field Champion. The 26-year-old received international attention after sporting a rainbow Nike tick on her track shoes when competing in Doha, Qatar, where homosexuality is illegal. “Just for the generations to come, I want them to know it’s ok, no matter who you are or what you do, you can still be the best at it.”

The BeTrue campaign originated from a community initiative Nike employees formed in 2012 in an attempt to create a space diverse in orientation, identity, and expression. Now, the annual collection, created by LGBTQIA+ designers, supports various initiatives focused on advancing inclusivity in sports.

What was it like growing up in Tennessee and competing as a queer POC?

I grew up in the Mississippi area. All my siblings are guys – I have six brothers and along with that, all my cousins and really everyone in my family were all men. I don’t think anybody really noticed or knew until I was in college, and that’s when I first started experimenting and having these different feelings.

So, college is when I first came out – I told my brothers, my mom, my dad – they didn’t blink twice. They looked at me and it was like, “Okay?” I guess they didn’t believe me at first, and then they see “oh wait, she has a girlfriend now, maybe she’s serious about this.” My dad, he talked to me and was like, “I’m proud of you no matter what, you’re you. Don’t let anybody tell you this is wrong.” My dad fully supported me, and he was also excited because he was like, “you can’t get pregnant now.” [laughs]

I didn’t have any struggles, nobody teased me about it, nobody said anything, it was just like, “Ok, that’s Erica Bougard, she’s gonna do what she wants, regardless.”

At that time, had you already started running track? Did you have any supportive role models?

I did track, field, and basketball in high school, just to be doing something, and then I ran track every summer to get a scholarship to school. Eventually I got a full ride to Mississippi state, and in college I started hanging out with the basketball girls. Then I found these seven girls that became my little community, we could all talk to each other 24/7. They really helped me with not feeling so lonely in the world. It still isn’t fully accepted [being gay], but it’s more accepted now.

Do you have any advice for queer people of color who are looking to pursue track who aren’t as confident, or have the kind of support network that you had? Do people reach out to you on social media?

I just try to be the best voice I can be for the people who reach out to me because I really don’t have another way of reaching people besides the BeTrue campaign. You have to be at one with yourself and you have to be confident about it. So I just try to be that listening ear for anybody who’s around and anybody who wants to be my friend. If you want to reach out to me, I’ll reach back out. 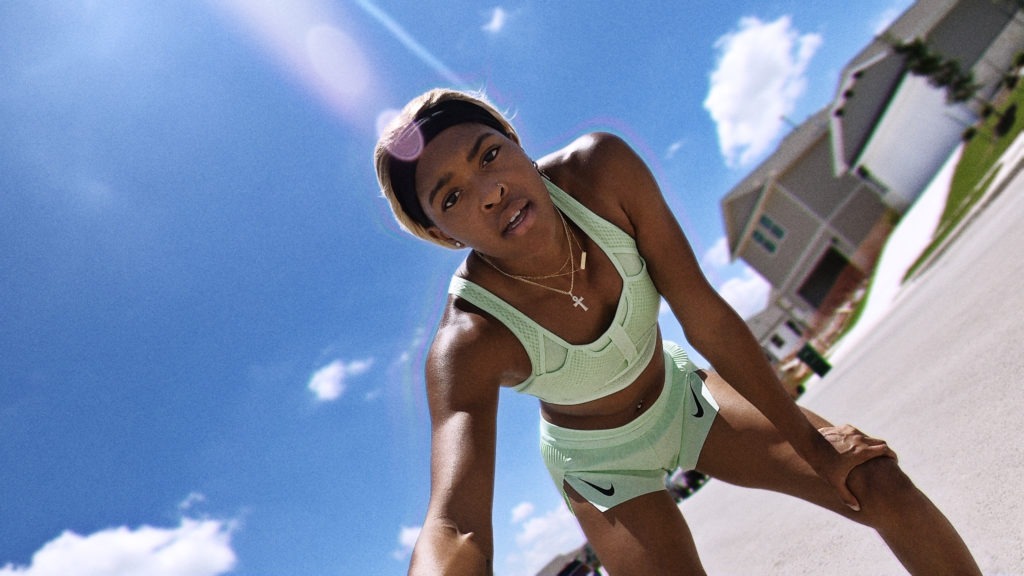 Can you tell us about when you wore the rainbow flag on your shoe in Qatar?

I had two of Nike’s BeTrue shirts and I bought the shoes to match, and I was like, “well, what can I do with the second shirt? I’ll just cut the flag out and put it on my shoe just to let people know.” I had the shoe done months before I even went to Doha, and they sent emails to prep us.

So then I had the shoe on, I didn’t even notice because I had the shoe for like six competitions before that one. So I got there and was bombarded with interviews. Like, it’s just a shoe, calm down, people.

After that, my social media following grew and I got a lot of [direct messages]. There might have been some hate in there, I don’t even acknowledge those types of messages, I just let it be. People are always going to feel some type of way about our community so I’m not going to argue with them because they’re wasting my time and I’m wasting their time. After that, things became a lot easier for me in the track and field world.

Did it make you take on more responsibility to use your platform to represent the community?

Of course, more things are coming my way because of it. Especially with the BeTrue campaign, that was the ultimate way of saying, “oh, well, I’m going to be me regardless.” BeTrue just meant everything to me, it was super fun to do. Even though the pandemic is happening, we did it the best way possible and it came out amazing. I feel like when I did it, a lot more people were like, “ok, well it’s ok for us to be us.” Just for the generations to come, I want them to know it’s ok, no matter who you are or what you do, you can be the best at it.

What advice would you have for people that are afraid receiving hate?

The best thing to do is ignore it but I know for a lot of people, it hits different. That’s why I think it’s easier for me because I know I don’t know the other person on the other side of that phone coming at me. I don’t know you at all so you shouldn’t have any say in my life.

What has been the most rewarding part of your journey?

The most rewarding part is the fans that stuck with me. I didn’t come out on my social media channels for a while, so that whole thing in Doha said it all, and all my followers, fans, and my friends supported me. I guess the most rewarding thing is the love, our community is just all love all the time.

What does pride mean to you and is there anything else you want to share?

Pride to me means love, being yourself, and not being afraid, which I know is hard for a lot of people. Being afraid stops you from doing so much. Pride means that we have a whole community. If you’re feeling down or you’re feeling low, always find someone to talk to, and if you don’t, I’m here.