“NRA SASHAY AWAY.” HOW GAYS AGAINST GUNS CONTINUES TO RALLY AGAINST THE GUN VIOLENCE EPIDEMIC

From the mental-health crisis, to school shootings, and hate crimes, Gays Against Guns is working to end gun violence in America.

On June 12, 2016, the Pulse night-club shooting sent shock waves through the LGBTQ+ community, when 49 people were killed and 53 others injured in the gay club in Orlando, Florida.

Just over a thousand miles away in New York City, high school English teacher John Grauwiler, reeling from the news, came across a Facebook post by his friend Kevin Hertzog, suggesting that the gay community come together. A meeting to discuss ways to mitigate the gun violence epidemic was organized at Manhattan’s LGBTQ+ center. On the day, the room, intended for just 70 people, was filled with 120.

The meeting was the first of many for the grassroots organization that became known as Gays Against Guns (GAG), which, in the words of its mission statement, is “committed to non-violently breaking the gun industry’s chain of death—investors, manufacturers, the NRA and politicians who block safer gun laws.” The group is hyper-aware that gun violence disproportionately affects the LGBTQ+ community, due to a combination of mental health struggles, increased suicide rates, and hate crimes.

GAG meets every other Thursday at Manhattan’s LGBTQ+ center. Grauwiler himself writes each week’s agenda. The meetings begin with a reading of the mission statement, followed by an In Memoriam, during which the group honors a victim of gun violence, whom the meeting is then a tribute to. After welcoming new members, announcing upcoming events, and reflecting on the successes and failures of recent actions via “report backs,” the group “spills the tea,” where they discuss the things that are going well. The meetings finish with a sense of optimism. “We end with something known as ‘fuck yeahs,’” Grauwiler tells me over the phone from New York. “It’s where someone randomly, popcorn-style, will call someone out and say, ‘Let me have a big fuck yeah for Kathy, for bringing all the material to the action,’ and we all say in unison, ‘Fuck yeah!’ And then we end on an upbeat note because this is very emotionally demanding work. So we try to add some levity where it feels appropriate, and that keeps us coming back.” 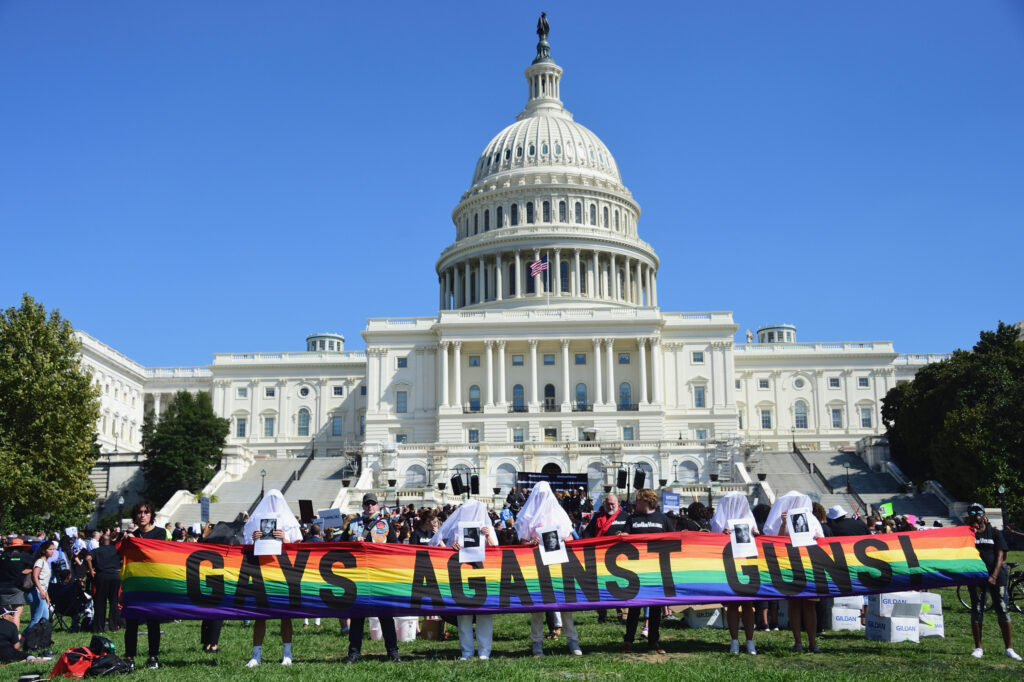 At the group’s first meeting, Corey Johnson, speaker of the New York City Council, gave GAG his spot at the front of the Pride parade, while Gilbert Baker, the artist famed for designing the original rainbow flag in 1978, offered to create a customized banner for the organization. “We were marching down Fifth Avenue, Kevin and I. At the end, by Christopher Street, we realized that this was a thing, people wanted it, and we needed to rise to the occasion,” says Grauwiler.

GAG was not Grauwiler’s first foray into activism. The 49-year-old, who, with his bald head, beard and mammoth muscles, looks more like a personal trainer than a high school teacher, was a member of the AIDS Coalition to Unleash Power, or Act Up, which was formed in 1987 to put an end to the AIDS pandemic and improve the lives of people with AIDS. Several similarities exist between Act Up and GAG, not least the groups’ recognition of AIDS and gun violence as public health crises. Like Act Up, GAG denounces homophobia and exalts homosexuality. “We really embrace our sexuality— we are not afraid of it, we use it as armor, we use it as a way to inform and to empower,” says Grauwiler, adding that the group also maintains a practical resemblance to Act Up. “We look up to Act Up for infrastructure or organizing, as well as actions. We take a cue from them in thinking about the stagecraft of actions. Act Up did that quite well. And some of Act Up’s expressions, like, ‘Where is your rage?’, ‘Where is your anger?’—that is language we’ve lifted directly from Act Up.”

GAG’s stagecraft at protests is likely its most resounding quality. Striking, imaginative, and subversive, it consistently garners the attention of both the press and passers-by. Grauwiler describes the group’s branding as “hyperconscious.” Its most powerful aesthetic comes in the form of its “human beings”—eerie, veiled figures in white, each holding a photograph of someone whose life has been lost to gun violence, along- side a concise bio. The members not in white often sport tie-dyed pink and orange GAG T-shirts or denim jackets, brandishing banners emblazoned with witty slogans, including “NRA Sashay Away.”

Grauwiler’s interest in gun control stems from personal reasons as much as it does civic concern. When he was 19, during his first year in New York, he attempted to impede a mugging and subsequently had a gun pulled on him. Years later, as he rode across the city on his bike, he witnessed a child shoot another child. His race and sexuality also made the epidemic impossible to ignore, as did the fact that he is a teacher. “As a person of color, the Charleston shooting just crushed me. As a teacher, the Sandy Hook shooting … I lost my faith in humanity. And then Pulse—when that happened, I was still very upset, but then I got angry. I wanted to do something. So gun violence found its way into my life personally and also [through] different aspects of the intersectionality of my life.”

GAG has an unfettered approach when it comes to holding corporations who invest in gun manufacturing accountable. In 2016, the organization launched its #DropTheGunStocks campaign, whereby it rallied against BlackRock, one of the largest corporate shareholders of gun companies’ stock. The group held a die-in—a form of protest during which campaigners lie on the floor, in this case representing those who had lost their lives due to gun violence—at the Black- Rock headquarters. Placards reading “Gun$ sell. People die. $tock soars” were also brandished by members. “A year-plus later, BlackRock has really changed its tune as far as the money it’s investing in stocks goes,” says Grauwiler. “There was a nice synchronicity there between looking at corporate culture and its relationship to gun manufacturers, and that relationship to gun death—following a sort of a chain of death.”

Some of GAG’s most powerful actions have taken place in Washington DC. Demonstrators have gathered in the atrium of the Hart Senate Office Building, goading the senators out of their offices. The group has performed a die-in, screamed, and created the shape of a broken heart on the floor, before reading statements about the lives lost due to gun violence in the Republican senators’ respective states. Such civil-disobedience protests often result in arrests. “We’ve really been able to shake the atrium at times,” says Grauwiler.

The work of GAG is far from done. The measures Grauwiler wishes to see taken to curb gun violence are copious. The first is the repeal of the Protection of Lawful Commerce in Arms Act, which protects firearms manufacturers and dealers from being held liable when crimes are committed with their guns. He also believes in the dismantling of the Tiahrt Amendment, which prohibits the Bureau of Alcohol, Tobacco, Firearms and Explosives (ATF) from sharing information with anyone but a select few. “If that stuff were out there, the information would help people make choices about cutting down on gun trafficking,” he says, going on to describe the current data- base for guns as “archaic.” “It almost feels like people want to keep guns a mystery, to make it as difficult as possible to trace them,” he says. “I can’t imagine the fact that we don’t have a gun registry. It’s insane.”

Days after our interview, Grauwiler emails me something “short and sweet” to sum up GAG: “As a direct-action group, we believe that every time we are out in the streets, we are winning. We are educating the public, we are drawing attention to the issue, and pushing the needle further along—one action at a time.”