“RESIST” IN TIMES OF POLITICAL UNCERTAINTY, MICHELE PRED TURNS TO THE CANVAS

Artist Michele Pred has been creating works that challenge our physical, cultural, and emotional interaction with objects over the last couple of decades.

By integrating found materials with contemporary issues and politics, Pred’s work continually asks the willing, and unwilling, viewer to confront these challenges head-on. Most recently, during the Women’s March on Washington, Pred carried a modified police riot shield with the words “My Body My Business” written across it. Here Pred answers Mission magazine’s questions about her work, past and present, and about creating art in today’s political climate.

Rebecca Roberts: Over the past year, how do you think the context of your work has changed? Have older works taken on new meaning, and are you considering producing new works under our current political climate differently?

Michele Pred: I feel like most of the issues I have been working on for the last few years, including equal pay, reproductive rights, gun control, and equality, were already very important. Now, however, they feel absolutely urgent. For example, the riot shield with the “My Body My Business” text is something I came up with before the election. Then, in the huge buildup to the Women’s March in Washington, I decided to bring it to DC and carry it at the demonstrations on Inauguration Day. My experience there convinced me of the power of juxtaposing the symbols of entrenched power with the messages of equality. I quickly decided that I wanted to make a whole series of the Riot Shields with different feminist slogans on them. I am currently making them using nail polish for the text instead of paint. Some of the text I am working with includes “Pussy grabs back,” “Nevertheless she persisted,” “Nasty woman,” “Pro choice,” “Equal pay,” “My body my business,” “Equal Rights Amendment,” and “Resist.”

I might also mention that I am starting to view my work with airport confiscated items and post-9/11 ideas of security in a somewhat refreshed light. In part because of the focus that the Trump administration has placed on travel restrictions, but also because our general sense of security was such a focus of his campaign, and I do not think that bodes well for our future.

As for the production of work, I am trying to balance the sense of urgency I feel to respond to the wave of political activity engulfing us with the need to pace myself for the long haul. I have noticed a sense of fatigue setting in with some people…and that is totally understandable. How we can stay energized and strong is something I think about every day as I plan out the days, weeks, and months ahead. 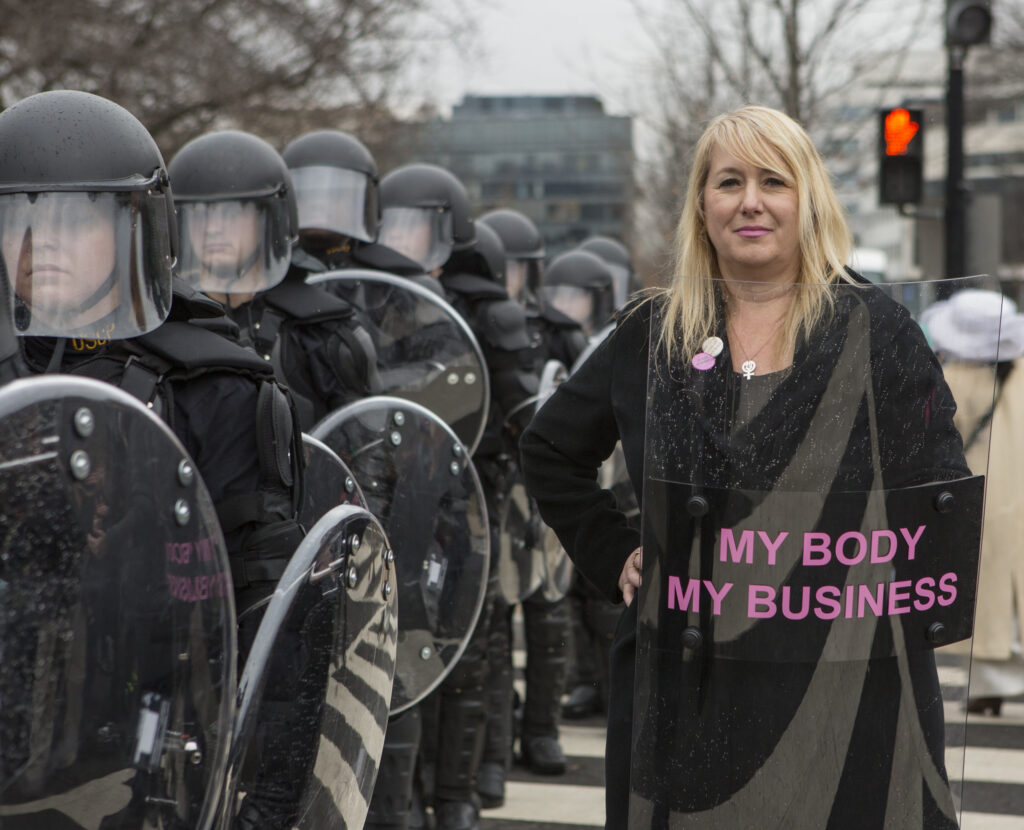 RR: I’m interested in how your objects move through time and space and how that changes them for you—i.e., activated at the Women’s March or populated on social media by Amy Schumer. There’s an ability for the pieces to be both independent objects as well as immersed within a bigger conversation. Was that always an intent, or is it a result of the renewed interest and activism around women’s issues?

MP: It has always been my intent to activate my projects, whether they be more object- or performance-based. With the purses, for example, I have tried to amplify the conversation by becoming involved with Planned Parenthood and NARAL and directly supporting them with donations from sales.

Another example was my “ShopDrop” action at an IKEA in California on Black Friday in 2009. I posted on Facebook about the project before I left the prints at the IKEA (at this time promoting projects on Facebook was far less common). I also sent out press releases to local media. I wanted there to be a larger conversation rather than a project that was like a tree falling in a forest. My intent is always to provoke real thought and to ask questions of my audience.

Of course, with the rapid rise of social media, this has now become an incredibly complex and nuanced undertaking. I can plan out courses, but the stream of media has its own currents, and I need to be flexible and respond quickly when appropriate. 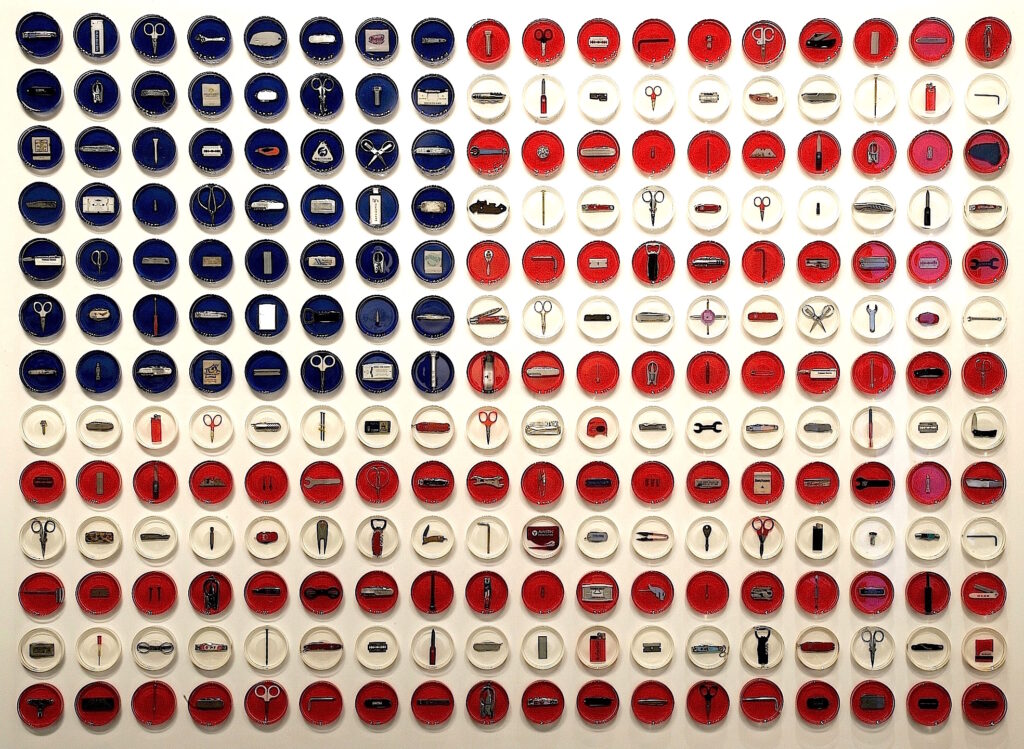 RR: Is there a work of yours that you feel really speaks to the moment, and likewise was there a specific moment within the production of art made by women that really inspired you?

MP: I am, of course, very excited about my current work with the riot shields. There is real potential here to spark large-scale conversations about the relationship of power and freedom. Object, performance, and real-world action can intersect and amplify the ideas and questions. In some ways, this work is also looking ahead to where the Trump administration’s policies could lead us.

As more fully formed and realized pieces, though, I feel like my purses connect most directly with now. So much of what seems to have gone wrong lately is aimed at women. From the Supreme Court and the vilification of Planned Parenthood to the Cabinet and the election itself, the need to draw attention to women’s issues is beyond urgent. My purses focus not only on the messages but the need to publicly voice opinions and discuss.

As for inspiration, I tend to look at the work made by women like Barbara Kruger and Jenny Holzer during the Reagan era. That time was similar to our own in that progressive ideas were under assault and artists responded with great work. 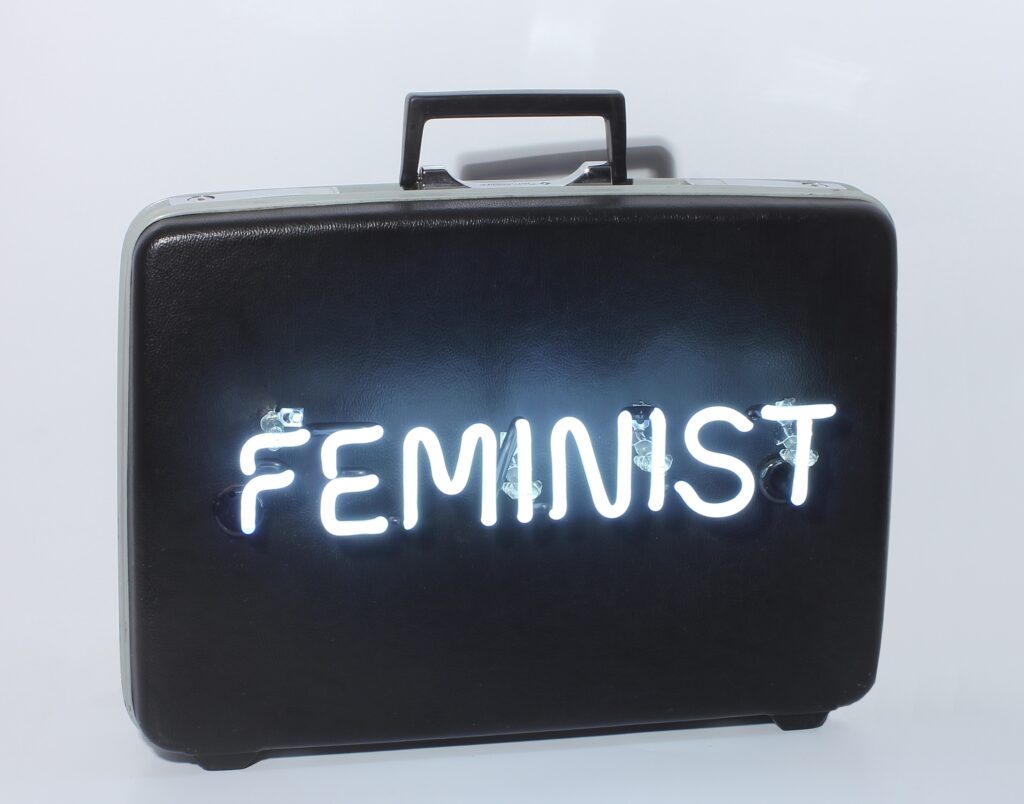 RR: Lastly, since the election I’ve heard a lot of artists talk about what the role of the artist is, what responsibility comes with that, and the freedom of the artists’ voice in today’s world? I’d love to hear your thoughts on that.

MP: My background and my personal interests and values are expressed through my work as an artist. For me, that means analyzing and reflecting on what is happening around us politically and culturally. It feels more like my life’s calling than a responsibility.

In my view, the responsibility of an artist is to help us reflect and to push the boundaries of our perceptions. That can be applied to many realms and ultimately adds value to our societies. We need to not forget beauty even as we work hard to preserve progress and build a world free to create it. I have confidence that we have artists of all types among us and that all they need is the courage to pursue their visions no matter what.