There’s nothing like summer in the city—unless you don’t have working AC in your fifth-floor walkup. If you’re looking to escape the muggy metropolitan heat this season then you’re in luck—as of July 1st NYC beaches are open for swimming. For those who have been longing for a sunny day at The Rockaways but have been stuck inside due to lockdown, things are finally looking up. Pride month may have just passed, but we suggest checking out the infamous Jacob Riis Park Beach—the gayest shoreline in town.

Known to many as Riis Beach, it’s the queer summer hot-spot in New York. Named after the social reformer, journalist, and photographer Jacob Riis, the mile-long shoreline is located in Queens on the Rockaway Peninsula. In pre-corona times, the isolated eastern part of the shoreline is typically filled with sun worshipers playing in the water free of inhibitions. With July 1st opening, we expect to see more of the same (undoubtably with some added social distancing).

According to the NYC LGBT Historic Sites Project, the eastern part of Riis Beach has been an LGBTQ+ locale since the 1940s. Originally a place where white gay men typically gathered, catching some rays and cruise, Riis has since welcomed a more diverse range of beachgoers. By the 1950s, white lesbians staked their claim on the sand, and a decade later Black and Latino LGBTQIA+ people became regulars too. Now, almost a century on, the beach remains one of the most vibrant and affirming outdoor spaces for queer New Yorkers.

Summers at Riis—not marred by a pandemic—typically feature a myriad of LGBTQIA+ friendly events and parties, such as the annual Fat Femme Beach Day or alternative celebrations to the NYC Pride Parade that aren’t so corporate. In October 2018, after Ms. Colombia’s passing, LGBTQIA+ New Yorkers took to the beach to celebrate the life of the drag queen and gender-bending performer who was a Riis regular. The events revel in all things queer and as Out Magazine describes it, allow “for queer and trans bodies to be publicly visible,” something not always possible for those in the LGBTQIA+ community. 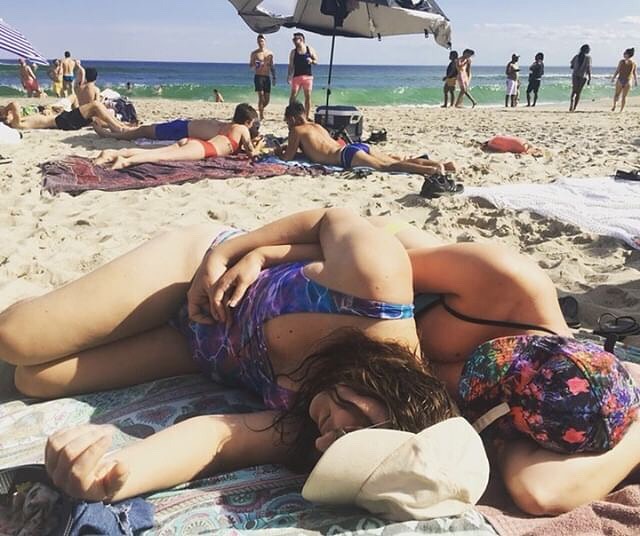 For some queer and transgender folks, feeling at ease in a bathing suit on a public beach can be hard, and can even conjure up feelings of dysphoria. The Human Rights Campaign defines gender dysphoria as “clinically significant distress caused when a person’s assigned birth gender is not the same as the one with which they identify.” Plus, swimwear options are few-and-far-between in the transgender community, which doesn’t help. Refinery29‘ s Hannah Schneider wrote, “traditional swimwear is unavoidably concerned with anatomy, and as such it often adheres to and emphasizes a deeply flawed notion of the gender binary.” For trans and nonbinary people, this can be a problem.

Riis Beach, however, provides a safe space where LGBTQIA+ bodies “are neither ogled nor mocked, but rather welcomed with open arms, supportive smiles,” as writer Sam Manzella wrote for NewNowNext.

Despite generally existing as a sanctuary for LGBTQIA+ folks, the beach and its inhabitants have not been able to entirely avoid discrimination. Since 1972, when the National Park Service took over the beach and it became a part of the Gateway Nation Recreation Area, the Riis began to be policed more heavily than before. They cracked down on nudity, which was commonplace for the LGBTQIA+ section, and queer beachgoers were targeted for minor violations. Despite the progressive nature of New York, this still happens today—Brooklyn photographer Krys Fox was tackled in 2016 by undercover cops for his towel slipping off during a photo shoot at the Riis.

On a positive note, increased policing has led the eastern section of shore to become a popular location for activism. Back in 1971, the Gay Activists Alliance (GAA), one of the first gay rights groups to form after the 1969 Stonewall Uprising in Greenwich Village, organized a voter registration drive. More recently, activists have put on events like last year’s “Know Your Rights” seminar, partnering with the NYC Anti-Violence Project which taught LGBTQIA+ attendees what to do if they encounter the police at the beach.

Though gay beaches span the globe, there’s something distinct about Riis—a place with links to activism and a deep history of queer culture. At Riis, the LGBTQIA+ community can play freely in the sunshine and be supported by their own. As Manzella recounts of the beach, “peace of mind is only bolstered by the crowd, which, if my sweaty Saturday afternoon in the sun was any indication, is loudly, proudly, and visibly queer.”