“No one—no matter how hard they try or how they attempt to convince you they can—can tell you who you are.”

Nike’s BeTrue campaign was pioneered by employees 8 years ago, when they created a network diverse in orientation, identity, and expression, particularly with regards to the LGBTQIA+ community. It has since evolved into an annual collection that supports initiatives advancing equality in sport. A powerful film launched the 2020 campaign, released in conjunction with Mission’s latest issue, LGBTQIA+.

To mark the film’s release we spoke to Schuyler Bailar, the first transgender athlete to compete in any sport on an NCAA (National Collegiate Athletic Association) Division 1 team. Swimming since he was one year old, Bailar was initially recruited by Harvard to swim on the women’s team, and after transitioning, was offered a spot on the men’s team. A relentless advocate for LGBTQIA+ rights, Bailar dedicates much of his time to public speaking, focusing on inclusion, body-positivity, and mental health awareness.

How has being an athlete shaped your identity and world-view?

I always say I was a swimmer before anything else. I learned to swim when I was less than a year old. I don’t remember learning; I only remember that the water always felt like home. My love of swimming developed into a love of the sport—of competing— and my experience in competitive swimming has taught me nearly everything crucial to my character: my tenacity, my fortitude, my fastidious nature, my drive, and my ability to thrive through obstacles. The skills and character I built as an athlete are the largest informants of how I show up in the world today.

Was there pressure that came with being the first openly transgender NCAA D1 swimmer and the first publicly documented NCAA D1 transgender man to compete as a man in any sport?

Of course. I entered college with everyone watching—skeptical or outright rejecting my ability to succeed. But I don’t remember worrying too much about it. I didn’t start this journey to prove a point; I wanted to swim. Every day I’d ask myself: Why are you here? Is it to prove the ignoramuses and haters wrong? Well, sure, that would be nice. But that’s not why you’re here. You’re here to swim. I think this mindfulness is key no matter what you do.

What was coming out to your coach like, and the transition between being set to swim on the Harvard women’s swim team and switching to the men’s team?

I was terrified to tell my coach, Stephanie Morawski, because I knew doing so could cost me my spot on the team. But when I told Steph she said we’d figure it out. She was very supportive, “Happy swimmers are fast swimmers, sad swimmers are slow swimmers,” she said. She then spoke with Kevin Tyrrell, the men’s coach, who offered me a spot on his team. Neither coach pushed nor pulled me toward either option. It took me a painstaking month to accept Kevin’s offer, as I was not ready to give up the success I could have garnered competing as a female. But in the end, I realized my authenticity and congruence with myself and my body was more important than external accolades. I accepted Kevin’s offer and began competing on the men’s team that fall.

I always like to emphasize that there is no one way to transition, especially not in athletics. I encourage every trans athlete to investigate the risks and rewards. There are so many ways to find congruence within sport, body and gender. 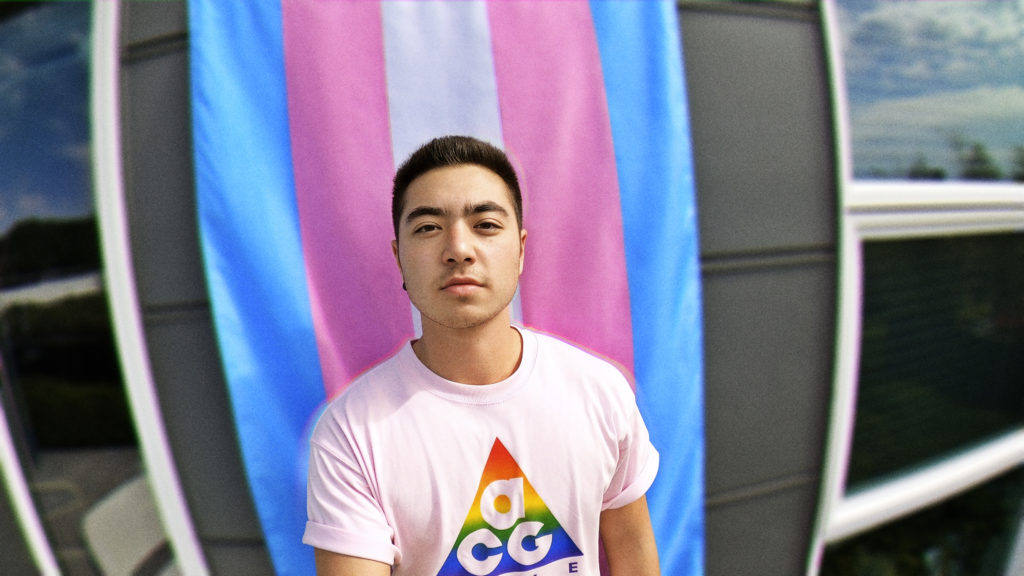 How do you stay true to yourself?

A lot of people transition and ask themselves: ‘What can I do to pass as the gender I identify as?’ And I get why, but I have always asked myself a different question: ‘What makes me feel the most like myself?’ Gently and constantly asking myself this is how I maintain my authenticity.

What advice do you have for transgender athletes hoping to compete at the collegiate level or beyond?

First: There is no one way to be yourself in sport. The world will pull you in a hundred different directions and you need to stay true to yourself. What do YOU need from yourself, from sport, from your body? What brings YOU the most peace? You don’t have to know all the answers. Sometimes asking the questions is enough.

Second: Do not let anyone tell you there is something wrong with your body or how you show up in your body. No one—no matter how hard they try or how they attempt to convince you they can—can tell you who you are. That is for you alone to decide. Remind yourself that when others are negative toward you and attempt to invalidate you, that their actions reflect THEIR character, not yours. That doesn’t mean their words can’t hurt. So, tend to the wounds, but don’t use their words as weapons against yourself.

How do you create space for those who need to be heard?

I can never claim to represent everyone in the trans and gender nonconforming community. I am a queer transgender Korean American man. I do my absolute best to synthesize good empirical psychological and medical research with the lived experiences of those in the community. I do my best to lend voice to these lived experiences by asking for community input while doing research and utilizing existing resources.

How does being a Nike athlete align with your values?

I found myself in tears the day the Nike Pride campaign aired. To see my face and the faces other LGBTQ+ athletes all over the internet was one of the most childhood-pain-healing moments I’ve experienced. I spent the better part of my high school years googling gay and transgender swimmers and found nothing. I concluded that I was not allowed to exist in sports, resulting in years of conflict between my identity and my sport. Nike’s ever-strong desire to stand up for LGBTQ+ athletes is saving lives. I could not be more appreciative.