Mission chats with Sarabande artist Berke Yazicioglu, who uses color and humor to explore the penetrability of manhood.

Berke Yazicioglu has a penchant for crossing boundaries. His series, Big Blonde Bottom, calls out the misogyny and homophobia surrounding male submission.

Artist and illustrator Yazicioglu started out in art publishing. Those roots are evident in his current work, which is bold, graphic, and colorful. Color theory in particular affects Yazicioglu’s art, especially his series Rite of Spring, in which he illustrates Stravinsky’s epic 1913 composition of the same title. Yazicioglu chats with Mission about his illustration process, his appreciation for Sarabande, and the state of his art in lockdown.

How did you get your start as a designer and illustrator?

I started out working in art publishing in Chicago, and later began freelancing full time. I was chasing design and publishing clients when I first moved to London, but ultimately found myself doing more drawing.

What drew you to explore the representation of male submission in Big Blonde Bottom?

Male submission is an underrepresented topic. In fact, for the majority of the public it either doesn’t exist at all or is obscene. There are lots of artists addressing this now. Submission and penetrability have a pejorative connotation when it comes to the male code, which transparently underlies misogyny and homophobia. Big Blonde Bottom is to remind men of their own penetrability with a bit of humor.

You’ve been working with Stephen Walters and Sons to create specialist textiles inspired by The Rite of Spring by Igor Stravinsky. What has the process been like translating music to textiles?

It’s hard to compare it to anything else I’ve done. I wanted to make something about this piece of music because its construction is so fascinating that I felt compelled to make visual pieces using similar principles. Some aspects of this translation were quite direct; the beat functions like a framework, instruments are various colors, notes are tones. In sections where flutes and horns imitate bird sounds, I drew the actual birds being referenced. They are woven enlarged like altar pieces to reflect the ritualistic plot. I was put in touch with Stephen Walters via Sarabande, they are a truly wonderful company and produce a very high-quality product. Working with them has been one of the most exciting parts of this process. 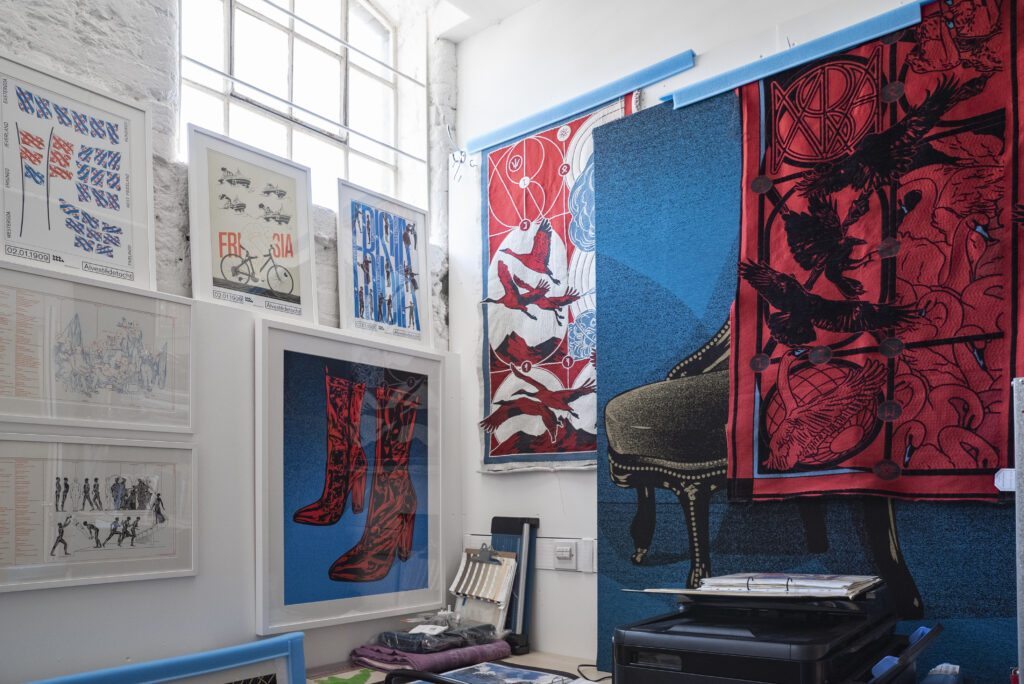 What’s the purpose behind using the colors red and blue in your work?

Blue and red are the most graphic colors, in that they function almost like black and white.

They’re not complementary on the color wheel, but they’re on opposite ends of the wavelength spectrum, blue has the shortest waves and red has the longest. This means the entire range of perceivable hues are between them. The starkness of their contrast intensifies proportion and form, almost to the point where the contrast itself becomes its own unit. They can also interchangeably represent good and bad. Blue can be associated with peace and calm while red with violence; or blue can represent sorrow, while red represents energy, life. Their interaction creates stress, but also a surprising harmony of hot and cold, action and rest, just like black and white. Using blue and red offers you a way to communicate clearly and simply, without having to forgo the beauty of color.

How has your time at Sarabande influenced or had an effect on your work today?

I think Sarabande is positively influencing all of us who are part of it. Creativity and work ethic are contagious, and we’re surrounded by people achieving great things in their respective fields. I’ve been introduced to great resources for production and continue learning how to administer my art practice as a business.

Have you collaborated with anyone in the studios?

I’m eager to collaborate with the others at the studio but it hasn’t come up yet. Regardless, there’s a flow of skill sharing happening among us, since there’s a variety of practices at the studio, from fine art to design.

Has your work changed at all since lockdown took hold?

I’m not sure if my work has changed much, but I produced a lot during lockdown. If it has changed, it will likely become clear to me later. I actually ended up getting more clients than usual during isolation, as web publishing was on steroids. It wasn’t an appropriate time for me to step back from my work and meditate on it.